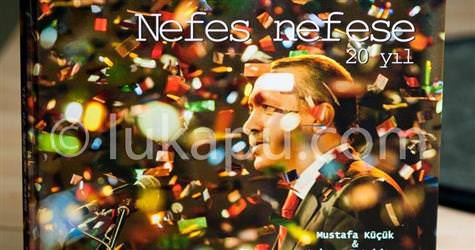 The past 20 years of Prime Minister Recep Tayyip Erdoğan's political career has been documented through photography and made into a book by Mustafa Küçük.

The past twenty years of Prime Minister Recep Tayyip Erdoğan's 'breathless' career has been encompassed in photographs by journalist Mustafa Küçük and compiled into a book by Lukapu. The book contains very unique images of the Prime Minister over the past 20 years as he serves as provincial chairman, municipal mayor, party chair and prime minister.

The book entitled "Nefes Nefese 20 Yıl" (A Breathless 20 Years) was published by Lukapu and is being sold in bookstores and on the www.lukapu.com website for 350 TL including VAT.

The book includes very special images of Prime Minister Erdoğan as he conducts the ritual prayer ceremony at a mosque, as he prays at the foot of a grave, while he officiates at a marriage ceremony, as he sings on stage and plays football that have never been released by the media as well as a number of photographs that have become extremely popular. It's also a book of who's who as it includes images of a number of significant political figures such as Abdullah Gül, Necmettin Erbakan, Süleyman Demirel, Deniz Baykal, Mesut Yılmaz, Kadir Topbaş, performers Osman Yağmurdereli and Kenan Işık, historical figures such as Nejat Uygur and footballer Lefter as well as foreign nation leaders and famous businessmen. One of the most striking photographs in the book is of Prime Minister Erdoğan and legendary Fenerbahçe footballer Lefter, who passed away in January. The image, which was taken on the Princes' Islands, shows Lefter embracing Erdoğan and laying his head on the prime minister's chest.