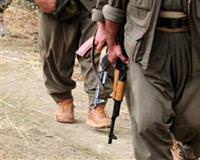 A group of PKK terrorists blocked off the Diyarbakır highway on Saturday night and kidnapped an English tourist before fleeing the area.

According to the information obtained, the incident took place Saturday night in the Tapan Tepe portion of the Bingöl-Diyarbakır highway. A seven to eight member group of terrorists initially blocked off the road and began staging propaganda for the PKK. The terrorists then proceeded to set one vehicle on fire and hijacked two others before kidnapping an English tourist from a passenger bus and then fleeing the scene.

A widespread operation has been initiated in the region and according to sources, the English tourists was en route from Diyarbakır to Rize when he was abducted.