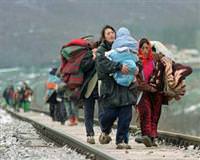 While in the past Turkey acted as a transit point for illegal immigrants trying to escape impoverished regions, with the nation’s economic developments of late it is fast becoming a ‘destination nation’ to emigrate to.

A 2011 report prepared by the Security Directorate's Smuggling and Organized Crimes Department sheds light on the increasing number of illegal immigrants entering Turkey to stay.

According to the report, in 2011 security forces staged 37 planned operations targeting international criminal organizations involved in immigrant smuggling in which 1,089 immigrants, and 281 individuals responsible for organizing their entry were arrested.

Turkish security forces were also responsible for assisting their counterparts in Germany, Italy, Bulgaria, France, Croatia and Greece to stage an additional six operations resulting in the arrests of 1,052 immigrants and 82 smugglers.

They come to Turkey to stay

Immigrants primarily come to Turkey via Iran, Iraq and Syria and are mainly from Myanmar, Palestine, Afghanistan, Eritrea and Pakistan. The report clearly notes that Turkey, which used to act as a transit point as immigrants headed to Europe, has now become a destination nation due to the country's improved economy. According to the report, over the past year alone there has been an increase of 40 percent in the number of incoming illegal immigrants.

Public cost over the past five years surpasses 28 million liras

The report notes that over the past five years, over 28 million liras from public funds was spent on boarding and deporting illegal immigrants. The report also revealed that illegal smuggling provides one of the most significant sources of financing for international criminal organizations including the PKK terrorist organization and last year alone, 130 million dollars was earned illegally through the smuggling of immigrants.