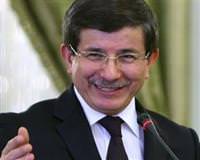 Foreign Affairs Minister Ahmet Davutoğlu announces that the United Nations will soon be opening a center in Istanbul.

Foreign Affairs Minister Ahmet Davutoğlu recently announced that the United Nations will be opening up a center in Istanbul and stated, "All of the U.N.'s regional offices will convene in Istanbul and Istanbul will become a U.N. city."

Davutoğlu was commenting on Turkey's foreign policy mission, when he said that their primary objective was to strengthen Turkey's role in the international system and order. In addition, Turkey aims to increase their reputation, presence and influence in the international arena. Objectives that Davutoğlu says Turkey is successfully achieving as evident from the increasing number of the ministry's representation abroad.

In 2002, Turkey had 163 representative offices abroad, whereas now that number has gone up to 202, explains Davutoğlu who goes on to state that they plan to gradually increase that number up to 219 and then later up to 231. Davutoğlu also stated that the number of Turkish embassies abroad has gone from 93 up to 120 and will soon be up to 130.

Noting that Turkey's total number of foreign representation offices has increased by 25 percent, which makes them amongst the top ten countries in the world, Davutoğlu explains that when they bring that figure up to 231, they will have become one of the top five nations in terms of foreign representation.
Reminding that Turkey was once solely members of NATO, the European Council and the Organization of Islamic Corporation, however now there is a Turk acting as the Assistant Secretary General to NATO, Mevlüt Çavuşoğlu is the European Council Parliamentarians Assembly Speaker, while a Turk serves as Secretary General of the Organization for Islamic Cooperation, Davutoğlu stated:

''We have set up a Turkic World Council. Turkey has been named one of the African Union's three strategic partners along with China and India. We have also become strategic partners with the Gulf Cooperation Council and have gained observer status with the Arab League."
''We are conducting strong negotiations''

Davutoğlu went on to express that Turkey continues to play an influential role in the entire UN system and stated, "Istanbul will become a United Nations center just like Geneva, Vienna and Nairobi. Istanbul will become the center of global politics and the center of global conscience."
Davutoğlu also stated, ''In the past, we were a country that would request loans from the IMF. This year however as an active member of the IMF Executive Board, we will now be on the side of those deciding which countries will receive funds."