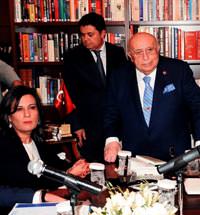 Former Turkish President Demirel was the first to be heard out by the Parliamentary Coup Inquiry Commission, which is investigating the past 1960, 1971 and 1980 coups as well as the 1997 military intervention.

Süleyman Demirel, Turkey's ninth president welcomed the Parliamentary Coup Inquiry Commission in his office in Ankara. One of the 11-member panel asked Demirel a question regarding the hanging of Menderes following the 1960 coup, to which he responded, "If you hang a prime minister and two ministers then the next prime minister to come on to serve will be sitting in the shadow of the gallows." MHP's Özcan Yeniçeri then asked Demirel, "Was Menderes' ghost influential in you grabbing your hat and walking away?"

Although Demirel refrained from responding directly, in response to another question on past coups, the former president stated, "Is it even possible to not be affected after witnessing their hanging? That image left its imprint." When asked about how he just 'grabbed his hat and left'. Demirel stated, "I wasn't just going to leave my hat, of course I grabbed it and left."