Those who stand beside tyrants are tyrants themselves 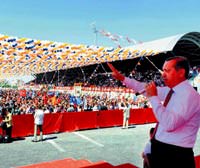 Prime Minister Erdoğan recalled that there was a time when his family would socialize with the Syrian leaders’, and stated; “Those who stand beside tyrants are tyrants themselves. We would desert anyone the second they stepped out of line, even our father.”

Prime Minister Tayyip Erdoğan was speaking at the AK Party's Denzli congress, when he spoke out against Bashar Assad and the massacre he is staging in his own country.

I CONDEMN THE SYRIAN MASSACRE

"Our brothers in Syria are being hit by bloody gangs supported by the state; some are even being massacred with their throats slit. In 1982, Assad's blood thirsty dictator father did the same. In fact, he killed 30,000 of our brothers in Hama. His son is on the same path, he has killed over 15,000 already.

There are some people in Turkey who choose to stand by this tyrant. However, those who stand beside a tyrant are tyrants themselves. 'But you had such great times with them.' It's true, we did, and we used to visit each other as families. However, we would desert anyone the second they step out of line, even our own father.

Those who just watch what is happening today in Syria should be aware that the blood shed will splash onto their own hands, face and conscience.

A group of actors have released an announcement of support for the recent meeting between Prime Minister Recep Tayyip Erdoğan and CHP Chair Kemal Kılıçdaroğlu, which stated, "We would like for it to be known that we are in full support for any efforts made towards putting an end to the pain suffered in all corners of the country as well towards building our joint future.

Referring to the meeting as "one of the most important recent political developments", the statement went on to read, "We want to share with the public that as members of Turkey's film industry, we are extremely hopefully as a result of the coming together of the party in power and the main opposition in order to begin a process of dialogue to handle with the biggest problem in this nation that has been ongoing for decades."