Erdoğan to Demirel: It’s a shame… 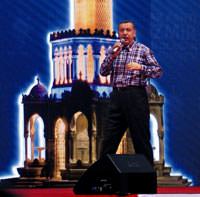 Prime Minister Erdoğan openly criticized former president Demirel who recently commented, “Those who are questioning the February 28th military intervention may one day be questioned themselves.” Erdoğan in return stated, “It’s a shame… You cannot frighten those who have owned up and taken these steps with your threats.”

"With a display of virtual threats for the masses they represent, CHP, MHP and BDP will at most delay this transition, however they cannot stop it. What transformation means to us is advanced democracy and the concept of a state of law," stated Prime Minister Erdoğan during an address for the AK Party's Izmir District Congress. Erdoğan recalled that in the November 3rd, 2002 elections, the AK Party garnered 17 percent of the vote, in the July 22nd elections, that figure went up to 30.5 percent, by the June 12th elections, the AK Party had 37 percent of the vote and went on to deliver the following messages:

AT AN EQUAL DISTANCE

"In Turkey, no one should attempt to impose on anyone's lifestyle or try to inject their own ideology onto others. We are a conservative democratic party. We absolutely have no hidden agenda as reiterated to the public by certain people. We have no regional sense of nationalism, no ethnic sense of nationalism and no ideological based nationalism. We are a democratic, secular and social government.
As the definition of secularism dictates, and in accordance to our own program, we are at an equal distance to all religious belief groups and they are all under our assurance.

We are eradicating all prejudices and are instead solely putting forth preferences. All we have done is lifted the prohibitions, restrictions and obstacles to different preferences. For ten years now, we have been lifting the pressure which was oppressing the people, and one by one we have gotten rid of the impositions and are leading the way to allow everyone, and I mean everyone, to live in the manner they believe.

The transition to democracy in 1930 lasted but three months, however they were only able to delay the transition for 16 years. In 1946, Turkey took on a multi-party democratic parliamentary regime, a system which has persisted up until now. From time to time, the parliamentary system was attacked. Any attempts made to intervene in democracy at the same time resulted in heavily hitting the economy.

CHP, MHP and BDP today are trying to instill fear in the masses they represent by issuing virtual threats, trying to conduct exploitative politics. At most, they may delay this transition; however they will not be able to do anything else.

Prime Minister Recep Tayyip Erdoğan also hurled criticisms at Turkey's ninth president Süleyman Demirel. Responding to Demirel's recent comment, "Those who are questioning the February 28th military intervention may one day be questioned themselves," Erdoğan stated, "It's a shame… You cannot frighten those who have owned up and taken these steps with your threats. Something is happening in this country… The people now say, "There will be no benefit to standing by the perpetrators."

A new era has begun. The chapter of coups and criminal organizations has come to close, never to be opened again.

Those politicians who sought aid through military interventions are now having their hopes dashed. The expectations of those trying to instill fear through coup paranoia are no more. Today there is a party in power that accounts for the will of the nation.

Opposition parties should give-up conducting fear-based politics. Ever since the founding of this party, our principles and goals have been clear. We are not a party that conducts intimidation politics.
When I say that the BDP is the CHP of the East and Southeast, I am not saying this for nothing. Through threats, intimidation and fear, they have prevented those in Diyarbakır from embracing the AK Party. Who are they? The PKK separatist terrorist organization. Who are they? The BDP. Just how in Izmir in 1930, they tried to drown the public's voice, today, that very same mentality, wants to prevent people from embracing their own party."