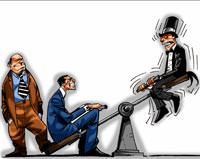 Former president Özal was one of the first people to seriously defend bringing on the presidential system in Turkey, by stating, “We need to take an initiative if we want to become one of the world’s top ten nations.”

Due to the coalition crisis in the 1970's, an exit route for the nation's political system was sought-after. The Justice Party, or Adalet Party, brought a formula to the table that would have opened the door to a transition to either a presidential or semi-presidential system. The Justice Party proceeded to present a proposal to parliament which purported the public selecting the president through an election. The proposal, which was put forth a short time prior to the 1980 coup, was not passed by the Assembly at the time. In 1982, during the drafting of the constitution, Kenan Evren also wanted to leave the presidential vote up to the public; however he was unsuccessful in doing so.

DEMİREL WAS ALSO IN FAVOR
The debate surrounding a transition to the presidential system also surfaced from time to time during the Motherland Party, or ANAP's, era in power.

Once Özal had made his way to the Çankaya Palace and had become distanced from his party, he also became the target of criticism for this very suggestion. One of the main figures that were against Özal at the time was Süleyman Demirel. DYP, or Right Path Party leader Süleyman Demirel, changed his perspective however, once he himself became president.

THE DIFFERENCE WITH ERDOĞAN
When it comes to the issue of transitioning to a presidential system, Prime Minister Recep Tayyip Erdoğan has taken on a varied stance compared to prior leaders.

First of all, he opened the issue up for debate prior to being appointed as president. In fact, in 2003, soon after becoming Prime Minister, Erdoğan announced that he wanted Turkey to take on a presidential system in order to overcome the 'oligarchic bureaucracy issue'.
This announcement was debated by the public for days. Erdoğan repeatedly brought up the issue however over the past nine years and during the 2010 referendum process, even stated, "The presidential system may be brought to the agenda once again in Turkey. If there is a consensus, then it may be something to be considered by our public. I would be in favor in terms of the operating of the system."

Contrary to Turkey's debates in the past surrounding the presidential system, this is the first time the issue has concretely been brought to the agenda in Turkey. The Commission of Conciliation, which operates under the umbrella of the Assembly, will be laying the option to the table. After that, parties will be spending an extensive time engaged in lengthy deliberations on the issue.