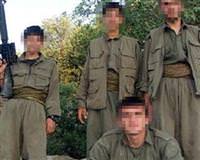 A confession from a terrorist who escaped the PKK reveals how the organization uses and abuses their child members. Children are brought to the camp at a young age and are forced to undergo ideological and political education. When they reach the age of 11 to 15, they are then trained to use weapons. The terrorist organization also forbids these children to go down to the city center in order to ensure they are not drawn to abandoning the camp.

A former PKK member, E.B. surrendered to security forces in Silopi last month. His testimony has revealed a number of shocking details regarding how the terrorist organization utilizes and harbors their younger members.

E.B. explained how it was that he joined the PKK mountain wing. E.B. who worked as a shepherd with his family in Kars, left for Istanbul in the hopes of earning money. After coming in contact with a number of PKK members, 28 year-old E.B. ended up being coerced to join their camp in the mountains. Four years later, he regretted the decision, escaped and turned himself in.

According to E.B., there were a significant number of children harbored in the mountain camp, which were generally brought there from impoverished border villages.

E.B. explains that like himself, PKK members that have joined later in life always retain the risk of abandoning the organization, due to having the knowledge of what their lives were like previously and of course having left people they love behind. Children that are brought to the camp at an early age however are offered a different form of training. Not only do they undergo intensive ideological and political education, but they are also taught how to use weapons at the ripe age of 11 to 15. In addition, unlike other militants in the PKK, child members are forbidden to enter city centers in order to ensure they do not face temptation to leave. These young members are not assigned to operations staged in cities. Supposedly, after they take their oath, these children undergo training especially geared by the organization for them to supposedly become candidates for a regional commander position.

PUNISHED FOR FALLING IN LOVE

"I fell in love with a woman in the PKK", E.B. explains. "She was also in love with me. We ended up forming an emotional connection. However, when our relationship was revealed they put me in isolation. They set up a court and I was sentenced to prison under the reasoning that I was disrupting the organization's activities. Meanwhile, I also learned that women members who objected to having relations with commanders were executed. Hearing this changed my perspective on the organization and its struggle."

THE POLICE GAVE ME WATER

"When I was being held by the PKK, I had the opportunity to escape and I did. I first headed towards Şırnak, however other militants from the camp ambushed me. Friends I had been living with for years opened fire to kill me. I later head towards Silopi and hid in a cave for three days. I remembered an armed attack that transpired in 2010 in Balveren in which soldiers were killed; however a wounded PKK member was taken to the hospital by helicopter. I no longer feared the state. In the camp we would be told that police and soldiers would first torture and later execute PKK members they captured. When I surrendered, the police first laid me on the ground to search me and then the first thing they did was give me water.

A SICK TERRORIST WAS HOSPITALIZED

E.B. explained that in the winter months the organization would retreat to caves in groups of 15 to 20 people. "A number of my friends ended up getting sick. I had heard that epidemic illnesses are rampant in the winter months due to poor air circulation and nutrition. One of our friends in the camp ended up getting sick. They told us they were taking him to a medical center for treatment but we were well aware that he had been executed, we just couldn't tell anyone."