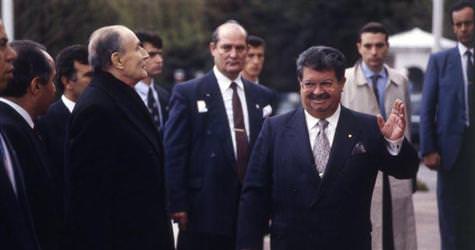 A report prepared by the State Advisory Council regarding the death of Turkey’s eighth president Turgut Özal states that a sudden death that transpires while the individual is currently serving is always considered to be ‘suspicious’.

The State Advisory Council recently released to the public a report into the death of former president Turgut Özal from the Presidential Press Center.

Ever since the April 17th, 1993 death of Turgut Özal, a variety of allegations have surfaced from time to time into whether or not foul play was involved in the former president's passing. No official investigation had ever been conducted, and therefore on October 1st, 2010 President Abdullah Gül requested the State Advisory Board (DDK) conduct a thorough investigation into the matter.

The DDK report looks into what transpired at the Palatial Residence as well as at Hacettepe University Hospital as well as discusses all of the related allegations into the former leader's death. The report, which points out that Özal was not suffering any long term illnesses and therefore his death was unexpected, states, "When a president suddenly dies while still in office, their death is always a 'suspicious' one.

The report goes on to state that it is 'inexplicable' that no evidence was gathered at the time from his residence nor was an autopsy conducted. According to the report, "It is completely inexplicable that no autopsy or search for evidence was conducted at the time." The report states that the unexpectedness of his death may have resulted in this 'inexplicable' fact that a throrough investigation was not conducted at the time nor in the 20 years since Özal's death. According to the report, this is one of the basic reasons that a wide array of allegations has since surfaced regarding the possibility that Turgut Özal's death was not natural and could have been instigated. The report goes on to state that this inexplicable situation is derived from the fact that there are no written regulations on the legal procedures following a state official having incurred a fatal illness or death in the present Constitution. "This issue has been completely left up to tradition and due to the intermittent interruptions in the nation's government structure; the proper procedures for such situations have not been completely finalized."

The report also highlights that there were significant issues in the availability and quality of medical services provided to the President at his residence at Çankaya Palace and emphasized that the lack of an ambulance on scene is "unacceptable".

The report notes that Özal did not receive the necessary initial treatment nor was taken to the hospital in a timely manner because the necessary procedures for a president falling ill (first aid personnel standing ready and available, a route to a specific hospital being previously designated, precautionary measures for the president's transportation established, a list and samples of everything the president has consumed recently, a list of the patient's medications and medical history, etc.) had not been defined at the time. As a result, the report states that former president Turgut Özal did not treatment going beyond what would have been done for a normal person in the same situation.