A rain of support for invite to Gülen 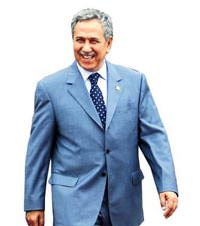 During an address at the closing of the Turkish Olympiad, Prime Minister Erdoğan called on Fethullah Gülen, who resides in the United States, to come home.

Speaking on A Haber, Deputy Prime Minister Bülent Arınç stated, "Even the staunchest opposition has seen with time that Fethullah Gülen is innocent. He loves Turkey and values his homeland above all else. He is an ambassador of peace. I hope the time has now come. There are no legal obstacles. He is the only one who can make the decision to return."

'OUR WISH IS FOR HIS RETURN'

Deputy Prime Minister Bekir Bozdağ also commented on Fethullah Gülen's potential return to Turkey by stating, "It is at his own discretion. Our wish and our hope is as we have expressed, for him to put an end to his homesickness and return to Turkey."
Boğdağ went on to state, "We have invited all of our nationals who have been forced to leave Turkey for whatever reason, to return. As you know, most recently Mr. Kemal Burkay returned in this context and he is now living in Turkey. We have also granted citizenship to Musa Anter's son.
We have also approached Nâzım Hikmet in a positive manner. We have expressed each time that it would be more beneficial for someone with Turkey's values to be in Turkey, rather than abroad."
MHP Group Deputy Chairman Oktay Vural states, "His return would be up to his own prerogative. Of course it would not be odd for him to return."