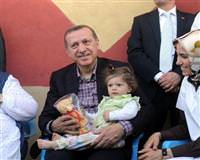 During a meeting of ‘common minds’, the Prime Minister proposed that the party’s ‘heavy guns’ take to the field in a step to ensure the youth do not seek out role models in the mountains.

Under Prime Minister Tayyip Erdoğan's order, the government has embarked on a new wave of progress in the Government, National Unity and Brotherhood Project. While Erdoğan wants the AK Party to become mobilized on solving the Kurdish issue, he has issued an order to Deputy Prime Minister Beşir Atalay to begin a series of new efforts. Atalay in response organized the first of a series of 'common minds' meetings between AK Party members to tackle the issue. The meeting was focused on the question of what could be done in order to gain momentum of the national unity process. All options were laid to the table during the meeting, one of which was the suggestion that the party's 'big guns' head to the field to explain to the public directly what the project intends to achieve. In addition, lengthy discussions were focused on ways to ensure that retreating to join the organization in the mountains no longer becomes an objective for the youth. The meeting, which was a brainstorm of sorts, worked on establishing, short, medium and long term solutions.

The results of these efforts will not only determined the steps to be taken in the National Unity and Brotherhood Project, but will also become one of the instruments used by the AK Party for the dialogue recently established with CHP in order to find a solution to the issue. Some of the main suggestions that came out of the meeting are as follows:

HEAVY GUNS TO TAKE TO THE FIELD: While efforts will continue in order to take further steps in the Government, National unity and Brotherhood Project, plans for the upcoming period is for a series of intensive visits to the region. A number of party representatives who are well-liked by the public and known for their conservative identities will be dispatched to the region in order to explain to the public the steps the AK Party has taken in order to find a solution to the Kurdish issue.

WOMEN TO MOBILIZE: The AK Party will also be activating their women and youth wings in a new strategy of communication, which will have them going door to door in the region in order to explain the government's policy on the Kurds and to express their own support. District MP's and party officials in the region will be meeting to determine the action plan.

THE MOUNTAIN SHOULD NOT BECOME A ROLE MODEL: Efforts will be directed towards ensuring that for the youth in the region, joining the organization does not become an objective. Support will be offered to new role model figures that are successful, engaged and are reconciled with their own identities.

A NEW RESTRUCTURING IN THE REGION: Despite the AK Party's having taken steps that are way beyond what was done in the 90's, there are issues explaining this to the Kurds, therefore the party plans to restructure the region in order to include various community groups into the initiative.

ALL OPTIONS ARE ON THE TABLE: The government has emphasized the necessity of continuing to take steps towards democratization despite PKK provocations and expressed that a solution will not be reached through a solely security-based approach.