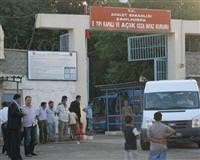 Thirteen prisoners were killed in a fire which erupted in a prison mutiny in the Şanlıurfa Penitentiary.

The incident supposedly was a result of a fight between two groups sharing the same ward. One group of 13 inmates beat up five others and then locked them in the bathroom. They then proceeded to barricade the door to the ward with beds and to set fire to their bedding. The thirteen instigators ended up dying from smoke inhalation, while the five who were locked in the bathroom survived.

The details are beginning to surface behind the tragic fire in a prison in Şanlıurfa which resulted in the deaths of 13 inmates. It turns out that an eight-person ward was being accommodated by 12 due to a capacity increase. As if that wasn't enough, the number of inmates in the ward ended up rising to a total of 18 prisoners charged with robbery and mugging. The ward was divided by two groups, which would experience disputes from time to time. One group blamed the other when their leader was punished with isolation. When the dispute turned physical, one group beat up five members of the other group before locking them in the bathroom. The situation transgressed into a protest of the living conditions in the prison as inmates began stacking up bunk beds against the door and proceeded to set fire to their bedding and pillows. The fire instantly grew, killing 13 inmates inside the ward. However, the five inmates who had been locked in the bathroom downstairs survived.

When the inmates' relatives and loved ones caught wind of the fire, they scrambled to the prison demanding to see the inmates. Police were forced to intervene with pressurized water and pepper spray. In the ensuing chaos, one police officer was injured and ten people were arrested. A number of relatives suffered nervous attacks at the entrance of the prison. The relatives continued to wait to hear news of their loved ones until morning.

Minister of Justice Sadullah Ergin and Labor and Social Security minister Faruk Çelik have since inspected the prison and later held a press conference. "The warden on duty detected smoke and efforts were immediately started to extinguish the fire. When the door to the ward was opened it was discovered that a barricade had been set up of beds and had been set on fire. Due to the inability to access the ward as a result of the barricade of beds set up at the top of the stairs, the inmates were unfortunately unable to be saved," stated Ergin.