'Our nation is an island of stability in the world’ 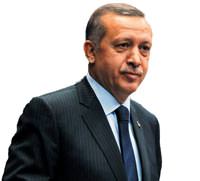 Speaking at the G-20 summit in Mexico, Prime Minister Erdoğan stated, “The speed of growth, national revenue and foreign trade volume incurred by our nation in 2011, has drawn international attention, making it practically an island of stability.”

While in Mexico for the G-20, Prime Minister Tayyip Erdoğan attended the B20 Business Summit on 'Trade and Investment' where he had the opportunity to explain how Turkey remained afloat in light of the economic crisis.

"There is practically not a single nation in the world in which Turkey does not export to today. Our nation has drawn international attention, making it pretty much an island of stability."

TURKEY WAS NOT AFFECTED BY THE CRISIS: "The fast rate of growth over the past few years, coupled by the increasing trade volume and the convenient investment environment, positions Turkey in the sights of the international business world. With its effective financial and fiscal policy, as well as additional policies made to improve the public debt structure and decrease the risk of liquidity in the banking system, the effect of the economic crisis was extremely limited in Turkey."

THERE IS NO NATION WHERE TURKISH GOODS HAVE NOT ENTERED: "The 8.5 percent of speed of growth in 2011, the 772 billion dollar national revenue and the over 376 billion dollar trade volume has resulted in drawing attention to the nation as an island of stability in the world. No country remains where Turkish goods have not entered, as there is practically not a single country remaining to which we do not export to."

WE HAVE DEVELOPED OUR OWN UNIQUE MODEL: "Within the framework of the investment reform environment, in order to increase competitive strength, Turkey has developed its own public-private sector dialogue and cooperation model."

WE HAVE RISEN UP STEP BY STEP: "Turkey has quickly risen to the top levels of all related economic indexes. Over the past six years Turkey has gone up 25 places in the Heritage Foundation's 'Economic Independence Index'. Turkey has climbed 15 places in Forbes' 'Best Countries for Business List' and 19 places in a list published by the World Bank naming the easiest countries to do business in. Despite having acquired 18.5 percent growth for international direct investments amongst developing nations for 2011, Turkey actually saw an increase of 76 percent compared to the year prior in the volume of international investments to come into the nation."

WE WILL GROW WITH PRECISION: "We will continue to protect the unity of our investment, production, employment and export policies in the upcoming period in order to ensure our economy's performance of growth persists and the account deficit drops. At the same time, we are also determined to continue exerting efforts towards improving the investment environment as well as the impression of Turkey as a destination for investments. Our objective by the year 2023, is to become one of the world's top ten economies, while also reaching a 500 billion dollar export volume and bringing our national revenue up to 25,000 per capita."

ALL OBSTACLES BLOCKING TRADE TO BE LIFTED: Reforms of the investment environment as well as the new incentive system, reflects Turkey's investment-promoting approach in an effort to facilitate trade and investments in Turkey. As Turkey, we are participating in all proposals emphasizing the importance of multi-faceted liberalization of the global economy and lifting all obstacles that restrict trade and investments, in terms of the importance from a development and employment perspective. We are not limited to this, as we are also supporting the furthering of these views in the G20 platform."

ERDOĞAN AND OBAMA MEET TODAY
Prime Minister Erdoğan is scheduled to meet with U.S. President Barack Obama today to hold a discussion anticipated to focus on Syria, while also tackling regional issues involving Iran and Iraq. Erdoğan and Obama last met face to face in March of this year in South Korea for the Nuclear Summit held in Seoul.