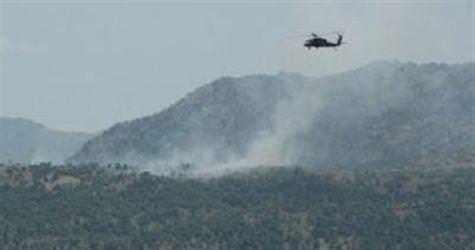 Up to 100 PKK terrorists launched simultaneous attacks at dawn on three military observation points in Hakkari province near the mountainous border with Iraq, killing eight soldiers and wounding 16.

After the event transpired, reinforcement teams were dispatched to the region by helicopter in order to track the terrorists that have since escaped to Iraqi territory. According to the information obtained, the terrorists that staged the attack were from the PKK's Zap camp and acted under orders of Hüseyin Feyman, a Syrian national who goes by the code name Bahoz Erdal. According to speculation, this may have been an attempt to sabotage new initiatives taken by the state to reach a solution to the Kurdish issue.

At approximately five-thirty a.m. Tuesday morning a group of between 70 to 100 terrorists, the PKK staged an attack with rocket launchers and rifles on the Dağlıca, Derecik and Yeşiltaş military outposts located in the Yüksekova district. Eight soldiers were killed and 16 wounded. The wounded soldiers have since been air lifted to a number of hospitals in Hakkâri. Some remain to be in critical condition.
Turkey's military forces responded immediately with reinforcement troops being dispatched to the region from air and land and combat continued throughout the day. Ambulances and additional troops were also sent to Şemdinli and the border region as periodic fighting ensued. The PKK terrorists have now supposedly made their way back into Northern Iraq, while forces continue to track them. In addition, certain targets determined by drones were also hit with bombs from helicopters.

This isn't the first time that an attack of this nature has been staged by the PKK in Dağlıca. On October 21st, 2007 terrorists infiltrated the region from Northern Iraq in order to stage an attack from seven different points. Twelve soldiers were killed in combat that ensued and 16 soldiers were wounded. Thirty-two soldiers were also rendered ineffective.

Armed forces chief General Necdet Ozel rushed to the region following the attacks, along with the commanders of the ground forces and paramilitary gendarmerie. The interior minister and a deputy prime minister also headed there.

Government and state officials met to discuss the fighting on Tuesday afternoon in Ankara in the office of Prime Minister Tayyip Erdogan, who was attending the G20 summit in Mexico.

The PKK, designated a terrorist group by Turkey, the United States and European Union, launched its insurgency in 1984. More than 40,000 people have been killed.

In his efforts to resolve the conflict, Erdogan has told parliament that Kurdish language lessons could be offered in schools. He also suggested he was prepared to hold talks with prominent Kurdish politician Leyla Zana after she said she believed he was capable of ending the Kurdish troubles.

Deputy Prime Minister Bulent Arinc raised the possibility at the weekend of jailed PKK leader Abdullah Ocalan being put under house arrest if the militants were to lay down their weapons.

However other leading government figures, pointing to nationalist sensitivities over such a radical move, dismissed the idea, and Erdogan said it was only Arinc's personal view.

Concerns about the PKK insurgency have been exacerbated by the conflict in Syria, which also has a Kurdish minority.

The PKK has launched sporadic attacks in recent months near the Syrian border in Hatay province, where thousands of Syrians are housed in refugee camps.

One Turkish soldier was killed on Monday night in Hatay in a clash with PKK militants, the governor's office there said.