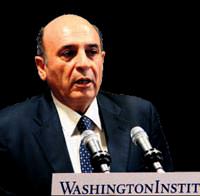 Israeli Deputy Prime Minister Shaul Mofaz recently stated that it is now important for everyone to realize that Turkey has become a superpower in the region. "We need to have strategic relations with Turkey as we did before. It is now time to leave the past behind us and to look towards the future," says Mofaz.

Speaking at a conference held at the Washington Institute, Mofaz responded to a question of whether there was any hope from Israel's side of repairing relations with Turkey. Emphasizing the importance of maintaining relations with Turkey, Mofaz stated, "We all, and especially Israel, need to realize that Turkey has become a super power in the region. I consider Turkey to be a superpower, there is no question about it," says Mofaz. The Deputy Prime Minister of Israel went on to state, "We should have a strategic relationship with Turkey as in the past. When I was Chief of General Staff, Turkey's Chief of General Staff was my closest friend. We need to solve this (the problems in our relations). When I say 'we', I am referring to the leaders on both sides. They need to come together, talk and leave the past behind us and look towards the future. I believe this will transpire over the next few months. I cannot say how or when, however it is crucial for both Israel and Turkey's strategic objectives."

While responding to another question, Mofaz reiterated his stance that the affirmative relations between Israel and Turkey in the past need to be revisited, and stated, "This is a strategic step that needs to be taken by both Israel and Turkey."