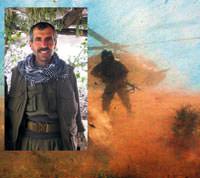 The order for the recent PKK attack in Hakkari was given by Syrian national Fehman Hüseyin. Another Syrian İskender Derik was responsible for organizing the group that staged the attack. Yet another Syrian citizen Yılmaz Kürdo not only directly participated in the attack, he also directed it.

According to the information obtained, the recent attack which resulted in the deaths of eight Turkish soldiers was ordered by Syrian national Fehman Hüseyin, otherwise known as Bahoz Erdal, the man in charge of the PKK terrorist organization's Special Forces.

Upon Bahoz's orders, the attack was supposedly organized by Reşit Dostum, aka Mehmet Can Gürhan the man in charge of the Zagros State wing and yet another Syrian, İskender Derik. Meanwhile, Zagros regional leader and Syrian national Yılmaz Kürdo actively participated and led the attack staged by nearly 250 terrorists. Eight Turkish soldiers were killed in the attack, while 26 terrorists have been killed thus far in operations that are currently ongoing by Turkish security forces.

The Van Special Authority Public Prosecutor's office has begun an investigation into the attack, while military prosecutors are also looking into any form of fault or negligence. Security forces recovered a series of military maps from the pockets of terrorists killed.

The decision to stage the attack was supposedly made at the Hakurk Camp and the order directly given by Syria's Fehman Hüseyin. The approximately 200 to 250 terrorists who participated in the attack were supposedly picked out one by one by the organization's leaders. The terrorists staged the attack in three groups. The initial group that went in used heavy machinery to initiate the attack, while another group supposedly intended to infiltrate the military outpost.

The group threw hand grenades from five to ten meters' distance and then tried to crawl their way into the military post. Seven terrorists were killed from this group in live combat with security forces. An additional 13 from the initial group that attacked were also killed in combat.

General Staff troops as well as Gendarmerie and Special Forces Police teams consisting of commandos, as well as 5,000 soldiers and guards are currently tracking down the terrorists involved in the attack. Ongoing operations continue primarily in the border regions of Derecik, Samanlı, Dağlıca and Yeşiltaş, intending to render ineffective approximately 200 terrorists that are supposedly trying to cross into Iraq. Helicopters from the Tactical Infantry Division Command are transporting Special Forces to the region of operations between Şemdinli and Derecik. Meanwhile, cobra helicopters are opening fire along terrorist transportation routes. War planes are heavily bombing targets in the Zagros mountain region spanning from Hakurk, Avaşin and Zap to the Iranian border. The terrorist organization's Zap camp is being hit by long-range howitzers in addition to F-16 war planes.

GENERAL STAFF: WE ARE DETERMINED

The General Staff has issued an announcement that they are determined to continue operations. The announcement stated that the troops that were victims of the attack immediately responded, resulting in the terrorist group suffering serious casualties. The General Staff also released the current death toll of terrorists in ongoing operations as 26, killed with weapons in hand, and one terrorist, which was captured alive.