President Gül comments on the downing of a jet by Syria 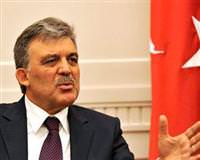 Speaking at a press conference during a trip to Kayseri, President Abdullah Gül stated that an investigation into the precise location where the plane was brought down and how the incident transpired was currently ongoing.

"It is not possible to cover over a thing like this, whatever is necessary will no doubt be done," Gül told reporters from the central Anatolian city of Kayseri.

The Turkish military said it had lost contact with one of its F-4 fighter jets off the southern Turkish coast near Syria on Friday morning and Damascus later acknowledged it had shot the plane down.
Gül said it was normal for jets to briefly cross into foreign airspace and said a probe into the incident would look at whether in fact it was downed while in Turkish airspace.

"When we think of the speed of these jet planes while flying above the sea, crossing over borders for a short distance and then back again is a little bit routine," said Gül. "These sorts of border violations are not ill intended and are simply the result of the speed of the aircraft. Is that the case, or did it transpire in our own territorial waters is something we will have to wait and see to find out."

Gül said Turkish and Syrian forces were still working together to search for the two missing crew of the aircraft.

Gül said on Saturday it was not possible to ignore the fact that Syria had shot down a Turkish fighter jet and said everything that needed to be done following the incident would be done.