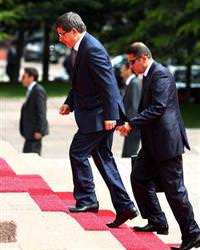 During the two hour meeting, issues including how to continue with ongoing search and rescue efforts, the continuous diplomatic traffic following the incident as well as an evaluation of the military movement in the region were all items discussed.

After the meeting, Deputy Chief of Staff Hulusi Akar and National Intelligence Organization Undersecretary Hakan Fidan remained at the Foreign Ministry, which is expected to be releasing a written announcement on the meeting soon.