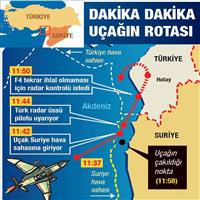 Details of the course followed by the Turkish F-4 jet shot down by Syria have been revealed.

According to information revealed by Foreign Affairs Minister Ahmet Davutoğlu, the F-4 jet, which embarked to conduct a national route system test flight, was shot down in international airspace just 13 minutes after a short violation of the Syrian border. The aircraft which lost control of the cockpit was downed in Syrian territorial waters.

The following are the minute-to-minute details of the flight course taken by the F-4 jet shot down by Syria on Friday.

At this point, the Turkish radar system in the region alarms the aircraft of the border violation.

11:47 - The border violation ends and the plane returns to flying over Turkey's territorial waters. The jet requests a radar check and begins t follow a new course.

11:58 – The aircraft is shot by a missile system in international waters.
The pilots lose control of the aircraft which then falls into Syria's territorial waters.