"We have no intentions to go to war” 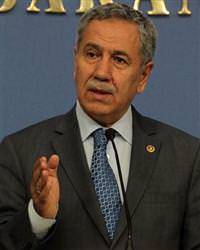 In an announcement following the Council of Ministers’ meeting regarding the fighter jet brought down by Syrian forces, Government Spokesman and Deputy Prime Minister Bülent Arınç stated, “We have no intentions of going into war with anyone.”

Explaining that they have conducted the necessary procedures in connection to NATO's 4th and 5th article, Arınç stated, "It should be made well aware that we will utilize to the full extent all of the options granted us by international law, within legal legitimacy."

The Council of Ministers meeting held at the Prime Ministry and chaired by Prime Minister Recep Tayyip Erdoğan has come to a close. The meeting, which lasted approximately seven hours, included a briefing by Air Forces Chief of Operations Ateş Mehmet İrez.

Speaking at a press conference following the meeting, Arınç stated that Prime Minister Recep Tayyip Erdoğan will be sharing his views on the downed aircraft by Syria to all of Turkey in a global address from tomorrow's AK Party group meeting.

Arınç reiterated that the notion was baseless that Syria was unaware the aircraft was Turkish and went on to express, "Syria is attempting to spread disinformation to the public by stating that the aircraft was shot down in Syria's air field."