"The wrath of Turkey is always severe" 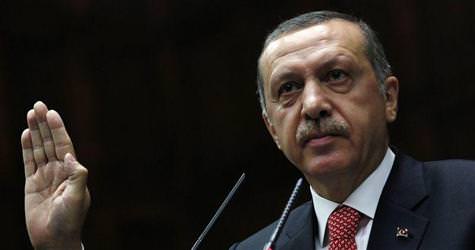 Prime Minister Erdoğan’s highly anticipated Tuesday AK Party Group meeting address has come to a close. Stating, “We will not fall into the traps of provocateurs calling for war; however we will also not remain sitting with our hands tied behind our backs,” Erdoğan emphasized that the Turkish jet was shot down intentional and any attempts to purport otherwise was disinformation.

Erdoğan's AK Party group meeting address was broadcasted live in 'breaking news' reports in a number of nations throughout the world. The following are a number of highlights from Prime Minister Recep Tayyip Erdoğan's worldwide highly anticipated address:

"As you know, on June 22nd, 2012 Syria staged an attack on a Turkish reconnaissance aircraft that was 13 nautical miles off of Syria. After being shot down, the jet crashed into Syrian territorial waters. I want to underline the fact that our plane was not shot down in Syria's air field; it was hit in international airspace. However, it is true the aircraft fell into Syrian territorial waters.

Immediately following the atrocious attack, we initiated search and rescue efforts for our lost pilots. Intensive search efforts are ongoing, and I want to wish for patience and fortitude for the families of the two pilots. Our foremost priority is being able to recover our pilots unharmed.

TURKEY'S WRATH IS AS STRONG AS ITS FRIENDSHIP IS VALUABLE

Turkey has never harbored any intentions of other nations' land, nor will it ever. We have never been interested in our neighbors' geological positioning nor their weaknesses.

Everyone should be well aware that Turkey's wrath is as strong as its friendship is valuable. Nobody should be fooled by our cold-blooded stance, it is not a representation of weakness.

There are some that are uncomfortable with Turkey's growth. We are very well aware that these puppet administrations are attempting to provoke Turkey.

Turkey is completely in the right in this incident in which an unarmed and openly identified aircraft which was in no way a threat was shot down while on an exploratory mission. Turkey retains the right to fly in this airspace. This was a flight that was intending to test our radars. Syria issued absolutely no warning before striking, and they say they are our friends…

Nobody would use the excuse of a very quick border violation for an unjust attack.

THE SYRIAN ADMINISTRATION RETAINS NO LEGITIMACY

Nine centuries ago, an Anatolian hero fought to protect Jerusalem and Damascus. During the time of the Seljuks and the Ottoman era, Damascus was as holy to us as Mecca, Medina and Jerusalem. The borders drawn up by Syria with a ruler cannot bring an end to the brotherhood between the Turkish and Syrian public. The administration in Syria does not represent our Syrian brothers.

By giving hope to the region, Assad promised his public and Turkey that he would change. However, he was lying. We saw that he was following in the footsteps of his father and we warned him and spent days conducting telephone diplomacy. However without paying any heed to our objections and advice, the Syrian administration continues to exert violence against women and children.

The Syrian administration no longer retains any legitimacy. However, we will continue to support our Syrian brothers' struggle.

ATTACK ON TURKISH JET WAS INTENTIONAL

It is absolutely definite and documented on our behalf that our plane was shot down in international waters. Although the aircraft did wrongfully enter Syrian territorial waters for an extremely short moment, the location and time of when it was shot down has absolutely no connection to the border violation. Our plane was targeted with hostility.

As of January 1st, Turkey's air field was violated 114 times by a variety of nations. It has now been proven that there was also harassment fire directed at the CASA plane that was assigned solely to help.

SYRIA HAS BECOME A THREAT FOR TURKEY

We will not fall into the traps of provocateurs calling for war; however we will also not remain sitting with our hands tied behind our backs. We will continue to determinedly follow up on this incident.

Turkey will determine the time and the place in order to take the necessary steps utilizing the rights granted by international law.