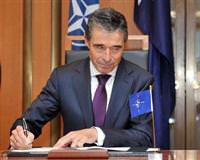 NATO states on Tuesday strongly condemned Syria's shooting down of a Turkish military plane as unacceptable but they stopped short of threatening any military response.

Secretary-General Anders Fogh Rasmussen said after an emergency meeting in Brussels of ambassadors from NATO's 28 member states that Turkey had the support of all its partners.


"Let me make this clear: the security of the alliance is indivisible, we stand together with Turkey in the spirit of strong solidarity," Rasmussen said. "We consider this act to be unacceptable and condemn it in the strongest terms. It is another example of the Syrian authorities' disregard for international norms, peace and security, and human life."Ankara requested the meeting of NATO's North Atlantic Council to discuss the incident, which it has described as an act of aggression. Damascus said it downed the aircraft in self-defense after it strayed into Syrian airspace.

The meeting was held in the NATO Headquarters in the Belgium capital of Brussels and was chaired by Secretary-General Anders Fogh Rasmussen. The joint announcement released following the meeting of representatives from 28 allied nations, which lasted almost two hours, strongly condemned Syria's unacceptable action.

The meeting was only the second time in NATO's 63-year history that members have convened under Article 4 of its charter, which provides for consultations when a member state feels its territorial integrity, political independence or security is under threat.

Turkey's decision to seek consultation under Article 4, instead of asking for military help under the organization's collective defense provisions, known as Article 5, suggested Ankara was also hoping to steer clear of inflaming the conflict.

Rasmussen told a briefing after Tuesday's consultations that Article 5 had not been raised in the discussions.

"It's my clear expectation that the situation won't continue to escalate," he said. "I would expect Syria to take all necessary steps to avoid such events in the future as regards to the developments in the region."
Meanwhile, in a letter to the U.N. Security Council, Turkey condemned a "hostile act by the Syrian authorities against Turkey's national security", saying it posed "a serious threat to peace and security in the region".