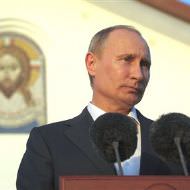 Russian State Leader Vladimir Putin called Prime Minister Recep Tayyip Erdoğan in order to relay his condolences for the shooting down of a Turkish military plane by Syria.

Erdoğan received the phone call on Wednesday at the Prime Ministry and the two leaders spoke for approximately 30 minutes.

An announcement released by the Prime Ministry following the telephone discussion included the following statements:

The sharing of information regarding Syria shooting down a Turkish jet consisted of a significant part of the conversation. Putin expressed his deep sorrow for the incident and relayed his condolences to Turkey.

Mr. Prime Minister Erdoğan and Mr. Putin have agreed to keep in touch in the process to follow, with the hopes that the incident will be completely clarified as soon as possible."