Turkey is determined in dealing with Syria 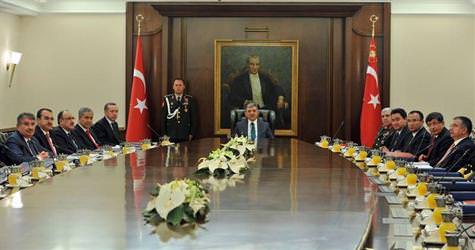 An announcement released by Turkey’s National Security Council, read “Turkey will act with determination to use all of its rights within international law.”

Thursday's National Security Council June meeting was the first held since Syria shot down a Turkish fighter jet last week. Held in the Çankaya Palace and chaired by President Abdullah Gül, during the nearly five and a half hour meeting, the president, senior ministers and military chiefs discussed the policy to be followed since the Syrian downing of a Turkish F-4, Iraq, the aftermath of the Arab Spring and the situation with Cyprus.

An announcement released following the National Security Council meeting, stated that the council discussed the details of the June 22nd shooting down of a Turkish reconnaissance jet in international waters by Syria. The announcement stated, "Turkey will act with determination to use all of its rights within international law against this hostile act. The bloodshed in Syria and the obstruction to a democratic process, as requested by the public, needs to come to an end as soon as possible."

Another item discussed by the National Security Council was the situation in Iraq, as the announcement released following the council meeting stated that Turkey would continue to closely track political developments. The announcement also noted that after over six months of political upheaval, it is important that a solution be reached within a democratic and constitutional framework.

The National Security Council also touched upon developments in Egypt and Libya during the meeting. While it was expressed that the outcome of the Egyptian election was pleasing, the fact that the transitional period transpired within democratic legitimacy, national unity and an understanding of compromise in accordance to the public's legitimate requests and expectations was also emphasized.

During the meeting, the National Security Council also discussed the measures and steps to be taken in order to preserve the Turkish Republic of Cyprus' basic rights in the Eastern Mediterranean and noted that all establishments would be working in coordination in order protect the rights of Turkey and Turkish Cyprus to search for natural resources in the region.