Gül: The worst scenario in Syria has been realized 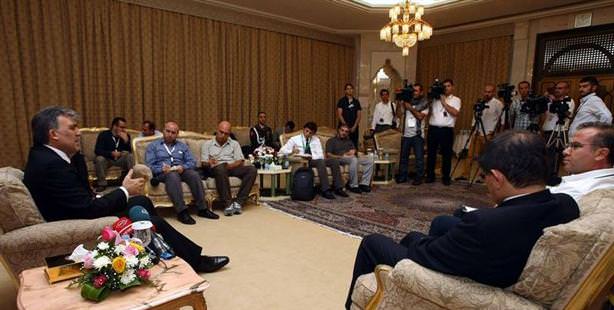 President Gül evaluated the current agenda while in Mecca: “We absolutely do not have an allergy to the Kurds… however; we have to put up some distance with terrorism. Most of the public is against the Assad regime. There is no end to the road at present…”

Speaking with journalists following the close of the Fourth Extraordinary Organization of Islamic Cooperation (OIC) two-day meeting, President Abdullah Gül discussed terrorism, the Kurdish issue and the situation in Syria.

WE NEED TO DIFFERENTIATE FROM THE PKK: (In response to the question, "What do you think about the possibility of a united Kurdistan forming in the region and what sort of threat would that pose?)

We need to differentiate between the Kurdish population and terrorism and the PKK as well as distinguish between inside and outside of Turkey. We do not want to appear as a nation that has an allergy to the Kurds. This is not an option. This is a population and it will remain so as it has throughout history. The Turks and Kurds are brothers to one another. You cannot distinguish between the two, nor separate them. Just how it is in Turkey, it is the same in other countries in this geography. We want everyone to be happy in the country they live in.

We want them to be independent, free and happy. How many countries do Turks live in? A number of nations are the same, they live in different countries. However, everyone should be happy in their own country.

TURKS CAN BECOME TERRORISTS TOO: When one looks from a Kurdish perspective, this is a reality of this geography. There are Kurds in Iraq, Syria and Iran as well as in other places. Therefore, everyone needs to be happy in their own country. Turks have always been the greatest supporters and protectors of their eternal happiness. We need to disassociate terrorism and the organization from this. We should always be in the fight against terrorism and terrorist organizations together. A terrorist could come from the Turks or the Kurds, therefore, Kurds in other nations also need to disassociate themselves from the terrorist organization.

WE HAVE ALWAYS DEFENDED THE RIGHTS OF THE KURDS IN SYRIA: The Kurds in Syria didn't even really have proper citizenship rights. They weren't even considered to be citizens. We discussed this issue numerous times with Syria.
By saying, "You take the lead to free my brother nation," this was going to be one of the reforms. However, it is not possible for us to accept the terrorist organization infiltrating any sort of settlement and opportunistic situation. We need to disassociate terrorism from citizens. We need to disassociate the Kurds there from the terrorist organization's offshoots.

THE WORST SCENARIO IS HAPPENING: The Syria situation is a serious one and everyone is sad. However, everyone has now seen that there is no end to this road. Unfortunately the situation along the border is something we never wanted to see of our neighbors, and it has currently turned into the worst scenario possible. We said over and over again, "The worst scenario could take place. Therefore, come early, take an initiative and do not allow your nation to be dragged into chaos." Unfortunately, today all of this has transpired. This regime no longer holds any legitimacy. If this situation continues any further, then in any case, this regime will go, however it could leave behind a chaotic environment. If this process takes a long time, then due to the resulting pain suffered even further, there is a bigger chance that feelings of revenge could develop.

STAGING WAR AGAINST HIS OWN PEOPLE: This is not just an ideological group or any other sort of group that is staging an opposition. In some nations, it happens that an ideological group sets out to begin their own struggle. Here it is a significant majority of the public that is saying no to the Syrian regime. If they hadn't chosen to use weapons against the people that flocked to the street and had just allowed them to gather then maybe they would have taken their own precautionary measures and things would have gone differently. However, quite the contrary, when they chose to use weapons, they inevitably ended up declaring war against their own public.

THE IRAQ MISTAKE SHOULD NOT BE MADE: There is an altogether public opposition. We believe that when transitioned to a new order this will all be brought under control. That is why we say the following to all of the countries we have spoken to: "Let there not be a mistake made as was done in Iraq. After the occupation of Iraq, the Americans disregarded our warnings at the time and dispensed the military and the nation's establishments, thereby creating significant chaos.

IRAN HAS NO SUGGESTION FOR A SOLUTION: (When reminded of the OIC's decision to suspend Syria's membership.) Iran' has a difference of opinion on this matter; however they did not make it a matter of dispute. They just announced their position at the summit. However, they have no suggestions for a solution. They also have concerns. To be honest, we do not feel that those concerns are particularly necessary. They know as well that this situation cannot continue.

Summit comes to a close and Syria's OIC membership is suspended

The Fourth Extraordinary Organization of Islamic Cooperation summit came to a close yesterday. Syria's membership was suspended to the OIC on the second and final day of the meeting held in King Abdullah's Safa Palace in Mecca. OIC Secretary-General Ekmeleddin İhsanoğlu made announcement following the meeting, in which he stated, "It will be impossible for Syria to act within the organization from here on out." President Gül also commented on the decision by stating, "A decision that shows the Syrian regime has lost their legitimacy was made today." In the history of the OIC, the decision to suspend membership was only ever made twice before, to Egypt and Afghanistan

When asked if there was any possibility of a cross-border operation into northern Syria, Gül responded by stating, "If we feel there is a threat, we could take any measures necessary." The President also remarked on the allegations Syria is offering the PKK weapons support. "The Syrian regime's position at the moment is clear; therefore it is very likely that they are offering the PKK a variety of possibilities."

President Gül also commented on the fact that MHP Chairman Devlet Bahçeli was not granted a visa to Kirkuk by stating, "Our Foreign Ministry tried to facilitate Mr. Devlet's trip to Kirkuk in every way possible. We even worked on establishing security measures. However, then we found out that he wasn't given a visa. I wish it had gone the other way and he could have gone to Kirkuk."