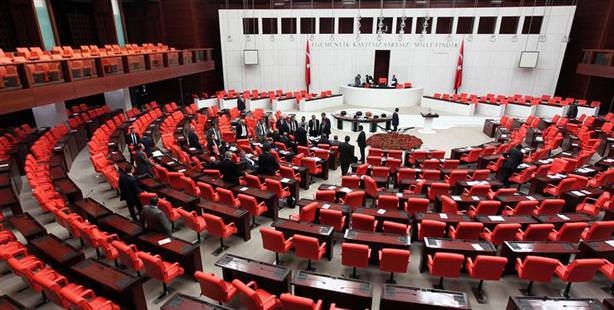 A motion to allow the government to authorize military action against Syria, following yesterday’s mortar strike which killed five Turkish nationals has been passed by Turkey’s Grand National Assembly.

The parliamentary vote, which was taken in a closed General Assembly session, ended with 286 votes in favor for the motion which will allow the government to approve military operations outside Turkish borders if the government deems them necessary.

The motion presented to the Assembly by the Prime Ministry seeks parliamentary approval to send soldiers to foreign countries in a memorandum which said that "aggressive action" by Syria's armed forces against Turkish territory posed a serious threat to national security.

MOTION SIGNED BY CABINET AND SENT TO ASSEMBLY OVERNIGHT

Late Wednesday evening, the Turkish cabinet signed a motion on military action in Syria which was then sent to the Assembly which convened at ten this morning.

The Prime Ministry motion, which was presented at the General Assembly meeting, is stated to deal with granting the government authority to approve the Turkish Armed Forces to take military action abroad or to be assigned to said nation for a one-year period.

The motion on Syria,signed by Prime Minister Recep Tayyip Erdoğan and sent to the Turkey's Grand National Assembly states the following:

''It is apparent that the ongoing crisis in Syria is increasingly negatively affecting our own national security as well as regional stability and security.

The military campaign staged by the Syrian Arab Republic Armed Forces has since September 20th, 2012 resulted in aggressive attacks on our nation's territories and despite our numerous warnings and diplomatic initiatives, these incidents have perpetuated. Aggressive actions directed against the territory of our country are on the threshold of an armed attack.

This situation has now reached a stage posing serious threat and risks to our national security. In this respect, the need has emerged to take the necessary measures in order to respond promptly
and swiftly against any additional risks or threats that may be directed towards our country.

Within this framework, it is requested that based on the 92nd Constitutional Article, authority be granted for a period of one-year to the Government to approve assigning or sending the Turkish Armed Forces abroad, based on the condition that the boundaries, extent, quantity and timing of the military action will be determined by the Government."

Main opposition CHP (Republican People's Party) held a meeting this morning prior to the emergency assembly session, during which it was decided that they would vote against the Syria motion, which they called a "resolution for war".

Meanwhile, the Turkish Armed Forces military continued to launch artillery strikes early on Thursday targeting the Tel Abyad district around 10 km (6.2 miles) inside the Syrian border, Turkish security sources said. The sources said a mortar bomb fired from Syria that killed five Turkish civilians on Wednesday had been fired from Tel Abyad. They said soldiers loyal to Syrian President Bashar al-Assad had been killed by the Turkish artillery fire.