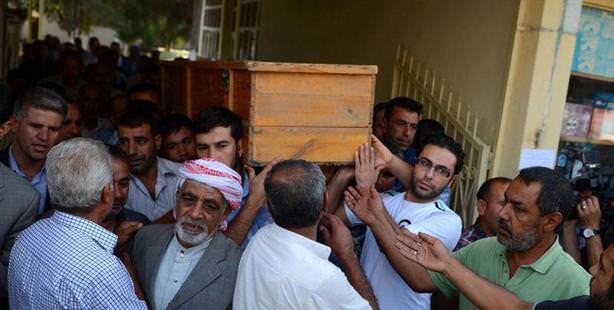 Turkey is burying the victims of the mortar shelling fired from Syria on Wednesday, which killed five, including a mother and her three children. Turkey’s retaliation shelling continues and the General Assembly is holding an emergency meeting to determine further action.

Turkey's government said "aggressive action" against its territory by Syria's military had become a serious threat to its national security and sought parliamentary approval for the deployment of Turkish troops beyond its borders.

"Turkey has no interest in a war with Syria. But Turkey is capable of protecting its borders and will retaliate when necessary," Ibrahim Kalin, a senior adviser to Prime Minister Tayyip Erdoğan, said on his Twitter account. "Political, diplomatic initiatives will continue," he said.

In the most serious cross-border escalation of the 18-month uprising in Syria, Turkey hit back after what it called "the last straw" when a mortar hit a residential neighborhood of the southern border town of Akçakale on Wednesday.

The Syrian Observatory for Human Rights said several Syrian soldiers were killed in the Turkish bombardment of a military post near the Syrian town of Tel Abyad, a few miles across the
frontier from Akçakale. It did not say how many soldiers died.

NATO said it stood by member-nation Turkey and urged Syria to put an end to "flagrant violations of international law." The U.S.-led Western military alliance held an urgent late night meeting in Brussels to discuss the matter and in New York, Turkey asked the U.N. Security Council to take the "necessary
action" to stop Syrian aggression.

In a letter to the president of the 15-nation Security Council, Turkish U.N. Ambassador Ertuğrul Apakan called the firing of the mortar bomb "a breach of international peace and security."
U.N. diplomats said Security Council members hoped it would issue a non-binding statement on Thursday that would condemn the mortar attack "in the strongest terms" and demand an end to
violations of Turkey's territorial sovereignty.

Members had hoped to issue the statement on Wednesday, but Russia - a staunch ally of Syria's, which along with China has vetoed three U.N. resolutions condemning President Bashar al-Assad's government - asked for a delay, diplomats said.

Russian Foreign Minister Sergei Lavrov urged Syria on Thursday to state publicly that a mortar bomb attack on the Turkish border was accidental and would not be repeated, RIA Novosti news agency said.
The Russian Foreign Ministry also called for restraint after the attack in which five Turkish civilians were killed on Wednesday.

"Through our ambassador to Syria, we have spoken to the Syrian authorities who assured us ... that what happened at the border with Turkey was a tragic accident, and that it will not happen again," RIA quoted Lavrov as saying during a visit to Islamabad."We think it is of fundamental importance for Damascus to state that officially," he said.

Meanwhile, some residents of Akçakale abandoned their homes close to the border and spent the night on the streets. Others gathered outside the local mayor's office, afraid to return to their homes as the dull thud of distant artillery fire rumbled across the town.

"We haven't been able to sleep in our own homes for 15 days, we had to sleep in our relatives' houses further away from the border because it's not safe down there," said shopkeeper Hadi
Celik, 42, a father of five.

In Syria, violence intensified on Wednesday with three suicide car bombs and a mortar barrage ripping through a government-controlled district of Aleppo housing a military officers' club, killing 48 people.