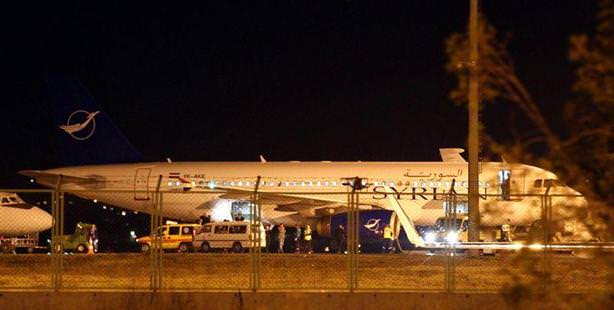 Turkish fighter planes scrambled to force a Syrian passenger jet to land in Esenboğa Airport and seized what it suspected was military equipment being ferried from Russia to Syrian President Bashar al-Assad's forces.

Military jets escorted the Damascus-bound Airbus A-320, which was carrying around 30 passengers from Moscow, into Ankara airport late on Wednesday after Turkey received intelligence that it was carrying military supplies.The plane and its passengers were allowed to continue after parts of the cargo were seized. Officials gave no details of what was confiscated, saying investigations were underway.

"We are determined to control weapons transfers to a regime that carries out such brutal massacres against civilians. It is unacceptable that such a transfer is made using our airspace," Foreign Minister Ahmet Davutoğlu said. "Today we received information this plane was carrying cargo of a nature that could not possibly be in compliance with the rules of civil aviation." Davutoğlu said Turkey was within its rights to investigate planes suspected of carrying military materials but declined to say what was in the cargo. Turkey would continue to investigate Syrian civilian aircraft using its airspace, he said.

Turkish authorities have also instructed Turkish passenger planes not to fly in Syrian airspace, saying it was no longer safe. The interception of the Syrian Air plane came hours after Turkey's chief of staff warned that his troops would respond with greater force if shells from Syria continued to hit Turkish territory.

"Upon receiving information that a Syrian passenger plane flying on September 10th from Moscow to Damascus was transporting military supplies, the decision was made to have the plane land in Ankara's Esenboğa Airport in order to conduct an inspection.

The pilot of the plane was informed of the situation as the plane was flying over the Black Sea, giving the pilot the opportunity to turn around, however the pilot chose to not reroute the plane and it was landed at 17:15."

The foreign Ministry statement also said, "The pilot did not relay any information regarding the nationalities of the passengers nor was a passenger list provided." The Foreign Ministry noted that they were informed that there were Russian citizens on board, from the Russian embassy and therefore continued to provide the embassy updates on the situation.

The Ministry statement went on to explain that all precautionary measures necessary to accommodate for the passengers safety and possible needs were in place. Passengers were allowed to exit the plane, the statement explains, however a majority of passengers decided to remain on board. "Therefore," the ministry states, "The concerns that have surfaced regarding risking passengers' safety is baseless."

Syria said on Thursday a Damascus-bound plane forced to land in Ankara by Turkish fighter jets while en route from Moscow had been carrying legitimate cargo. "All contents of the civilian Syrian plane that Turkish authorities forced to land at Ankara airport were listed on the statutory bill of lading and on the plane's manifest. It was not carrying any kind of weapons or prohibited goods," the ministry said in a statement. The head of Syrian Arab Airlines, Ghaida Abdulatif, said the cargo consisted of civilian packages with electrical equipment which had been officially registered.

Turkish officials received a tip the plane was carrying military equipment to Syria, where President Bashar al-Assad's forces are fighting rebels. The Syrian Foreign Ministry said that by using military means to force the plane to land, the Turkish government violated international laws.

"The sudden appearance of military aircraft, without justification or warning, threatened the safety of the plane and passengers," it said.The Syrian Foreign Ministry statement added a conciliatory note, saying that despite the Turkish government's "aggressive behavior", Syria still wanted to maintain friendly relations with the Turkish people.