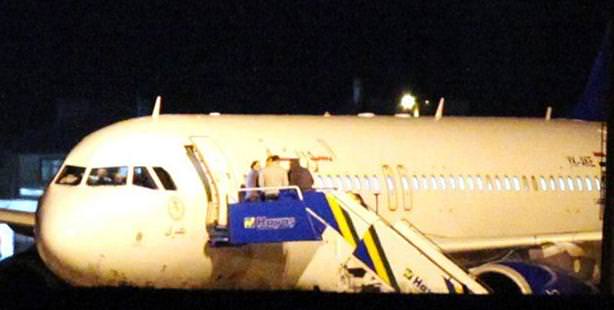 Prime Minister Tayyip Erdoğan commented yesterday on the Syrian passenger plane forced to land in Ankara on Wednesday, by stating that the plane was carrying non-civilian cargo of Russian-made supplies that are used in the defense industry, which was destined for Syria’s National Defense Ministry.

Erdoğan went on to state, "After receiving intelligence that the Syrian passenger plane was carrying non-civilian cargo, we conducted a thorough search. Unfortunately, there were these sorts of materials in the plane."

The Syrian Air Airbus A320 had taken off from Moscow and was en route to Damascus, when Turkish fighter jets intercepted the commercial plane as it entered Turkish air space and escorted it to land at Ankara's Esenboğa Airport Wednesday, under the suspicion it was carrying weapons.

Prime Minister Recep Tayyip Erdoğan made the following statements in remarks regarding the intercepted Syrian plane:

THE PLANE CONSENTED TO LAND AT 17:10: "The Syrian plane consented to landing at Esenboğa Airport at 17:10 local time. Once the plane landed, an area was designated in our terminal building where the passengers could exit the plane and wait."

THE SENDER AND THE RECIPIENT ARE OBVIOUS: "After the tip was received, a thorough search was conducted, which unfortunately revealed that there were non-civilian materials in the plane's cargo. A report was prepared on all of the materials confiscated and was sent to the related state departments. Who the intended recipient of the cargo is and who the sender is are all clear. "

YOU CANNOT EVEN TRANSPORT LIGHTERS: "Any sort of materials used in the defense industry, such as weapons, ammunitions, vehicles or supplies can absolutely never be transported by passenger planes. This is a requirement of international civil aviation law. You can't even transport a large number of lighters. In this situation, this rule was violated."

FROM RUSSIA TO SYRIA: "The cargo contained munitions from the Russian equivalent of our Mechanical and Chemical Industry Corporation that was being sent to the Syrian Defense Ministry. The related departments are currently conducting ongoing inspection of the materials and later, if necessary, an announcement may be made. All of the items are being recorded."

WHO PROVIDED THE INTELLIGENCE WILL NOT BE REVEALED: "You can appreciate that when it comes to the issue of who provided the intelligence, it is not revealed in these sorts of incidents."

PUTIN'S VISIT: "As for Putin's delayed trip, it is an issue we agreed on during a telephone conversation we had four days ago. As a result of this 45 minute conversation, our Foreign Affairs officials announced that the trip will be made December 3rd. This has absolutely no connection to this incident."

THE RECIPIENT WAS THE MINISTRY OF DEFENSE: "The cargo was from an office, bureau or corporation in Russia, whatever you want to call it, for an agency which exports Russian weapons and military materials, equivalent to Turkey's Mechanical and Chemical Industry. The recipient firm (which we no longer refer to as a firm) was Syria's Ministry of Defense… You can comprehend what sort of items these could have been. It was these materials that were confiscated."