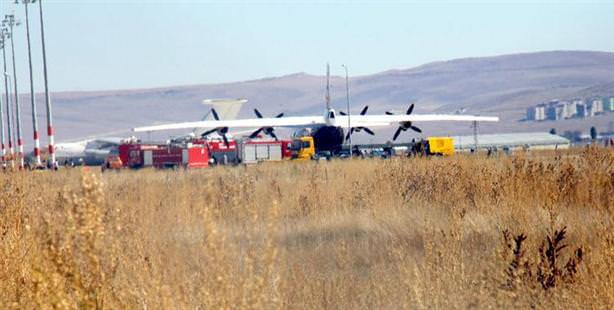 Turkey ordered an Armenian plane destined for the Syrian city of Aleppo to land on Monday at the Erzurum Airport in order for authorities to search its cargo.

Ankara had warned the Armenian aircraft that if it entered Turkish airspace it would be forced to land and undergo a search. The plane therefore was landed with the pilot's consent.

An Armenian plane transporting humanitarian goods to Aleppo requested permission to pass through Turkish airspace. Turkey granted permission under the condition that Turkey conducts a thorough search of the plane's cargo. The Armenian plane landed at Erzurum Airport at 11:30 on Monday, and according to Erzurum Governor Sebahattin Öztürk the search is currently ongoing.

AN ANNOUNCEMENT FROM THE FOREIGN MINISTRY

An announcement made by the Foreign Ministry states that the Armenian plane, which departed from Yerevan and is destined for Aleppo, is currently undergoing a routine cargo search."The aircraft was not forced to land with the aid of F-16s and the pilot was well aware before departure that they plane would be making a landing in Turkey," the statement said.

Turkish Foreign Ministry officials state that the plane was not forced to land based on any sort of intelligence regarding it transporting illegal materials instead of the claimed humanitarian aid and that it is simply the result of permission granted to use Turkey's airspace being contingent on the search of the aircraft. The plane will be allowed to continue on its journey if nothing else was found, a Turkish foreign ministry official said.

Just last week, Turkey grounded a Syrian plane which was headed to Damascus from Moscow in a forced landing with the use of F-16's to guide the plane's landing at Esenboğa Airport.