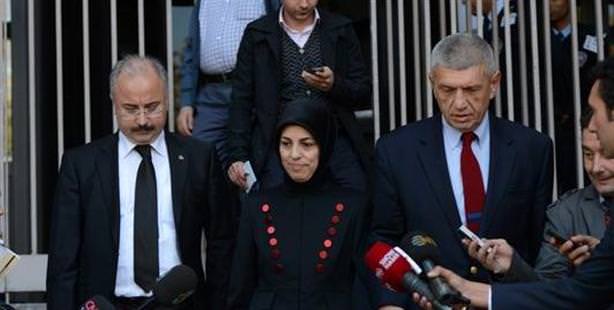 Former Virtue Party Deputy Merve Kavakçı, who provided a testimony to the Ankara Chief Public Prosecutor’s Office on Thursday for the February 28, 1997 military memorandum, regularly referred to as the “postmodern coup,” states, “I wasn’t defying the state; it was the West Study Group that was adjusting the balance.”

Merve Kavakçı was elected as a Virtue Party (FP) deputy in 1999; however she was not allowed to take her oath in parliament at the time because she wore a headscarf. Yesterday, accompanied by her attorney İsmail Aydos and spouse Cihangir Nazır İslam, Kavakçı testified as a "victim" to Public Prosecutor Mustafa Bilgili, who is overseeing the February 28th probe. Kavakçı, whose testimony lasted two hours, states, "

"I was not defying the state. What happened to me was done against the Parliament, it in itself was an unnamed coup," states Kavakçı, noting that she is a complainant against the West Study Group and the perpetrators of the February 28th coup.

Kavakçı was elected as a Virtue Party deputy for Istanbul on April 18, 1999 however was precluded from taking her oath in the swear-in ceremony for Turkey's Grand National Assembly by Prime Minister at the time Bülent Ecevit and members of parliament which were a majority of members of the Democratic Left Party (DSP) due to her headscarf. Kavakçı's, whose Turkish citizenship was later revoked due to her dual U.S. citizenship, recalls her ordeal: "

'PUT HER IN HER PLACE'

"There were statements rampant at the time saying that if Merve Kavakçı takes her oath wearing a headscarf there will be military intervention. When I arrived to the General Assembly in a headscarf DSP deputies began pounding the rows with their fists, chanting, "Out, out". The Speaker of the Assembly was trying to explain that there were no legal obstacles to my signing-in, however Bülent Ecevit, Hüsamettin Özkan and Kamer Genç objected. Female DSP deputies then surrounded the rostrum to prevent me from taking my oath. The female deputies proceeded to clap their hands yelling, "Out, out" and prevented me from taking my oath. The Prime Minister at the time, Bülent Ecevit took out a speech he had in his pocket on conventions and procedures and stated, 'This lady needs to be put in her place. This is not somewhere you can defy the state.'

However, I was not defying the state. I was wearing a headscarf in accordance to my beliefs, which is my own democratic right. I had campaigned in a headscarf. Yet, I was not able to take my oath in the parliament at that time. On May 13th, 1999, my Turkish citizenship was revoked. I later went to the European Court of Human Rights and received a ruling allowing me to run and be elected. What I went through was actually an unnamed coup against the Parliament. It was the deputies that made up the Assembly at the time that committed an unnamed coup by obstructing me from serving my duty."

Explaining that during the February 28th process the West Study Group was an illegal, coup-inspiring junta-like formation attempting to overthrow the government, Kavakçı stated, "Members of the West Study Group stated that this process would last for a thousand years. They would use statements such as, 'We are making a balance adjustment on democracy and if necessary we will use force.'

By influencing the judiciary and the media, they used their influence on the public against the legitimate government at the time. With threats and by placing tanks in neighborhoods, they coerced the government to resign. They illegally categorized Muslims in headscarves as being members of a religious order or sect, making them second-class citizens," states Kavakçı.

Today, Merve Kavakci will be providing a statement to the Parliamentary Coup and Memorandum Investigation Commission.