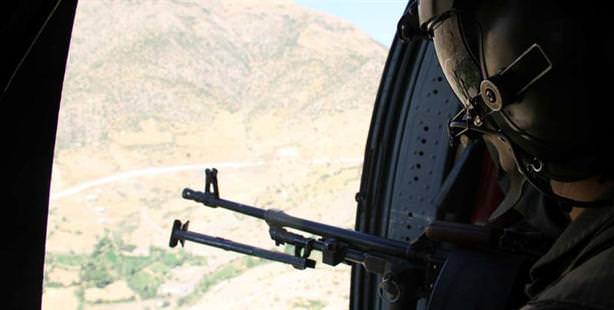 In operations staged against the PKK over the course of nine months, both in Turkey and in Northern Iraq, 670 terrorists have been killed, three tons of explosives recovered and 400 rifles and 800 hand grenades confiscated. At least 184 PKK members have escaped the terrorist organization.

The operations staged by the Turkish Armed Forces in both Turkey and Northern Iraq, have been a big blow to the PKK terrorist organization. A comprehensive report on the military operations staged on the PKK over the past nine months, states that 670 terrorists have been killed. Security forces also say that over 100 terrorists either wounded or killed, were abducted by the militants.

Investigations into the PKK have led to the arrest of 6,300 PKK members from throughout the country, that were either militants, sympathizers or individuals that have aided and abetted the organization in some way. In operations, 300 kilograms of plastic explosives and TNT and two tons, 900 kilos worth of hand-made explosives have been confiscated.

Heavily hit, the operations have resulted in the PKK's unraveling. A total 174 terrorists have escaped to PKK camps in the rural Eastern-Southeastern regions as well as from the camps in Northern Iraq, turning themselves in to security forces. The Turkish military's "inform and prevent efforts" on the terrorists' families also played a significant role in the terrorists' surrender. Yesterday in Şırnak, ten more terrorists turned themselves in to security forces.

'DO NOT RAID OUTPOSTS'

According to information obtained, Kandil has decided to change their previous tactics of attacking outposts due to the high casualty loss incurred by the PKK and has instead ordered that mine blasts and suicide bombing attacks be staged.

Security forces recovered and destroyed 80 kilograms of explosives, placed in two barrels and set up along the Diyarbakır-Muş highway, ready to be remotely detonated. Meanwhile also in Diyarbakır, but this time in the district of Lice, a mine was exploded on a road used by military vehicles. The explosion, which took place in front of an armored vehicle, did not result in death or injury.