A flood of love in Yemen 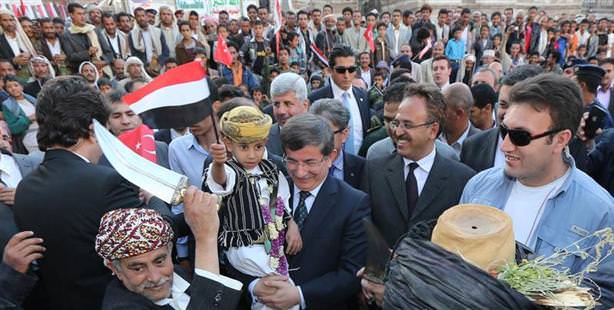 During a trip to Yemen Foreign Affairs Minister Ahmet Davutoğlu toured the historical market in Sana’a where he was welcomed with a wide display of love.

Students performed local dance performances and carried Turkish and Yemeni flags, adding a colorful display to the Foreign Minister's visit. In fact, Davutoğlu's visit of the historical city was a major attention-drawing event for the local public.

Greeting the public and visiting the merchants, Davutoğlu also went on to tour the Great Mosque of Sana'a. Both Turkish and Yemeni flags were hung on the Bab el-Yemen, which is considered to be the opening gate to Yemen.

Davutoğlu's arrival to the famous Suq al-Milh market created a stir of excitement. After his tour of the historic city, Foreign Minister Davutoğlu departed Yemen from the Sana'a Airport completing his two day trip of meetings.