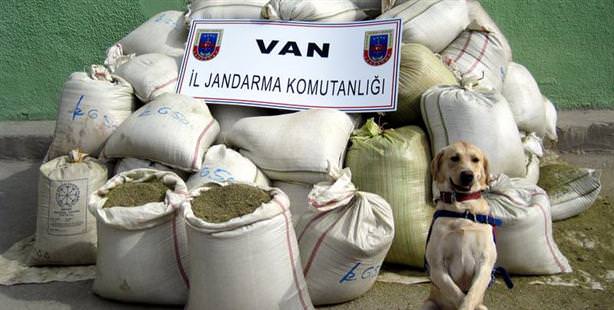 Security forces have seized five tons of marijuana in an operation staged by gendarmerie in Van and one ton in Diyarbakır believed to belong to the PKK terrorist organization. Diyarbakır Governor Toprak says, "The PKK is responsible for 75 percent of the drugs trafficked into Europe.”

In a recent string of narcotics operations, Turkish security forces have dealt a heavy blow to the PKK's most significant financial resource, confiscating six tons of drugs spread out over two provinces.
The Van District Gendarmerie Command and the national Intelligence Organization (MİT) were tipped off regarding a possible transfer of drugs from Van to Europe. Security forces proceeded to track the suspects for a month before they staged an early-morning operation in a rural region of the Topyıldız Village located in the Gürpınar district. In the operation, reinforced by gendarmerie teams, a large covered pile of marijuana was seized in Krom Valley.

Security forces first sent in the bomb-detecting dog 'Eylem' after which they sent in 'Açar', a dog specializing in detecting narcotics. Açar's reaction resulted in the uncovering of five tons of marijuana hidden inside 144 sacks.

In 29 operations staged in Diyarbakır between the dates of September 14th and October 22nd, security forces seized over one ton of marijuana. Diyarbakır Governor Mustafa Toprak was speaking to the press following an incident in which security forces searched a vehicle which was found to contain 145 kilograms of marijuana during which he stated that according to Interpol data, the PKK terrorist organization is responsible for 75 percent of all of the drugs trafficked into Europe.

Toprak went on to explain that recent operations in the Lice, Hazro and Kocaköy Districts have contributed significantly to depleting the PKK's finances, which has resulted in the terrorist organization facing difficulties in obtaining weapons.

Diyarbakır Governor Toprak also stated that over the past ten months security forces have seized over nine tons of narcotics in the province alone.