PM Erdoğan: “We have not abandoned our EU goal” 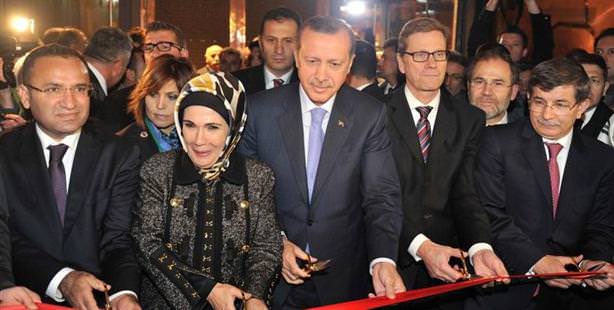 While attending the opening of the new Turkish Embassy compound in Berlin, Prime Minister Erdoğan responded to the question, ‘Will Turkey join the EU by 2023?’ by stating, “If they string us along until then the European Union will lose out, and at the very least they will lose Turkey.”

Prime Minister Tayyip Erdoğan kicked off a trip to Germany by participating in the opening of the new Turkish Embassy in Berlin. Joined by his wife Emine Erdoğan, the Prime Minister attended a reception following the flag-raising ceremony during which he answered questions from the press and later delivered a closing speech at a panel on Europe and the economic crisis held at the Berggruen Institute. Erdoğan delivered a series of messages including stating that Turkey's has not given up on its EU goal, "it would be to both of our benefit," he said

WE HAVE RETURNED TO OUR CENTURY-OLD HOME: "With this opening, we have returned to the same location where our embassy was once located nearly a century ago. Turkey and Germany have had nearly 250 years of diplomatic relations,' stated Erdoğan. The new Turkish Embassy compound was built on the very same location where the former embassy was situated before being bombed in 1942 during WWII.

WE HAVE NOT GIVEN UP: "Turkey has not given up on its goal of membership because it believes in the prospect and success of the EU," stated Erdoğan.

I AM CONSIDERING A TL ZONE: "I know that there are some EU member nations that say, 'I am against the Euro and I do not want to be a part of the Euro zone.' For example Britain… They are quite pleased with their current situation. In fact they even say, 'You should stay away, in fact you can establish a TL-zone.' I said 'I m thinking the same thing'. When it comes to the monetary system, the EU needs to check itself."

HALF OF THE EU IS A BURDEN: "There isn't a second country that has been made to wait at the EU's door for 50 years now. If you were to lay all 27 countries on a scale then you would see that over half of these countries are behind Turkey. Over half of these nations are also a burden to the EU."

IT WAS THE FIRST TIME HE GAVE A DATE: (When asked if Turkey will have joined the EU by 2023) "They probably won't string us along,' Erdoğan said, indicating for the first time, how long Ankara might be willing to wait. 'But if they do string us along until then the European Union will lose out, and at the very least they will lose Turkey."