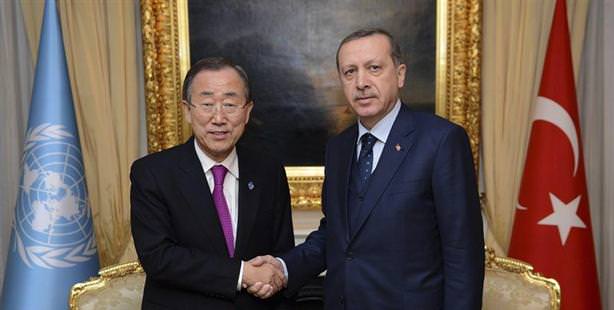 United Nations Secretary-General Ban Ki-moon, who while in Turkey met with both President Gül and Prime Minister Erdoğan, recently announced that he has sent two letters to Assad warning against the use of chemical weapons.

During his trip to Turkey which included a visit to a camp housing Syrian refugees in Gaziantep, U.N. Secretary-General Ban Ki-moon relayed to President Abdullah Gül that he has warned Syrian President Bashar al-Assad against using chemical warfare.

Expressing that he can understand Turkey's concerns against any potential threat of Assad using chemical weapons, Ban stated, "I have sent two letters to Assad, warning him that the use of chemical weapons against his own public would be an outrageous crime. I told him he would face huge consequences by international law, if he chooses to go this route," said Ban.

While pointing out that the Syrian opposition has regrouped under new leadership in Doha, President Gül requested the United Nations take on a more active role in the conflict.

Ban, who moved on to Ankara after visiting a refugee camp in İslahiye, stated, "This gave me the opportunity to see with my own eyes how difficult life is right now for Syrians."

Although his arrival to the capital was delayed, U.N. Secretary-General Ban Ki-moon had the opportunity to meet with both President Abdullah Gül and Prime Minister Tayyip Erdoğan. Later in the evening Ban also met with Foreign Affairs Minister Ahmet Davutoğlu for dinner.

In a statement released prior to meeting with Davutoğlu Ban stated, "Our priority is to take steps to ensure the violence comes to a halt. Later, we will work on the new transition period."

The following are a series of headlines from some of the main items discussed during Ban's series of meetings held in Turkey yesterday:

The U.N. needs to take action. The international conscience is becoming wounded. Brahimi has a key role. The number of Syrian refugees in camps in Turkey has surpassed 130,000. The daily needs of these camps need to be supported by the international community.

It is important that Palestine has gained observer state status. Now the U.N. needs to step in fast in order to begin a new negotiation process between both sides.

The crisis between Erbil and Baghdad is intensifying. The region cannot handle more tension. As you have also stated before in Baghdad, the only ay is for them to love together, however Maliki is not keepinghis promises.

We are expecting the U.N.'s Special Cyprus Envoy Downer to not halt efforts due to the Greek Cypriot elections.

Thank you for your support in helping make Istanbul become a U.N. city. Turkey is also expecting the United Nations to support Turkey's contributions in Somalia.