Mahmoud Abbas: We thank Turkey and we will never forget this 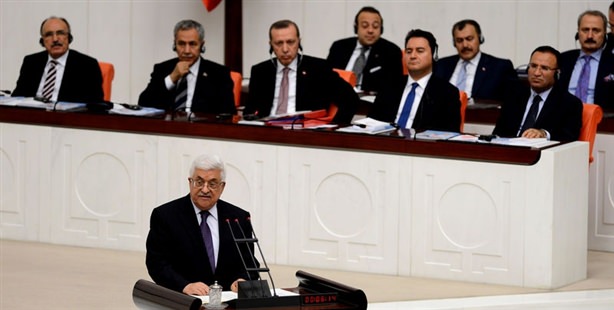 In an address to parliamentarians at Turkey’s Grand National Assembly, Palestinian President Mahmoud Abbas thanked Turkey for its support for Palestinian’s bid in the United Nations General Assembly to upgrade its status from an observer entity to an observer state and said, “We will never forget this day.”

Addressing lawmakers in the Turkish parliament on Monday, Palestinian President Mahmoud Abbas was referring to the passing of a resolution in the U.N. which upgraded Palestine to a non-member observer state status when he stated, "This is a historical day for us." Abbas also called on Israel to "revisit the 2008 negotiations" and praised Foreign Minister Davutoğlu.

As Palestinian President Mahmoud Abbas entered the General Assembly hall he was greeted by a standing ovation by the majority AK Party members and the opposition alike. Addressing lawmakers, Abbas thanked Turkey on behalf of the Palestinian public and stated that the walls that protect Jerusalem are Ottoman Turkish walls.

WE ARE ON THE RIGHT PATH

Abbas praised Foreign Affairs Minister Ahmet Davutoğlu and stated, "Mr. Davutoğlu was not just in New York as a visitor. He was there to play an active role. He made contact with all of the nations in the world. He exerted the maximum effort that he could there."

Expressing that this is just the beginning and not the end, Abbas went on to state, "We still have a long and difficult road ahead, however we are on the right path. We are on the right path that will lead us to a full-fledged independent Palestinian state built on the borders of 1967 with Jerusalem as its capital. God willing, Jerusalem will be the capital of this state. This great national success has brought an end to the conspiracies of a state with temporary borders. Palestine has now entered an era of compromise," stated Abbas who requested assistance from Turkey and the Islamic world in helping lift the embargo on Gaza.

"WE ARE GRATEFUL FOR THE SUPPORT"

Expressing that they want to give peace a chance, Abbas called on the Israeli government to put a halt to new settlements and to revisit the negotiations that were suspended in 2008.

Stating that he will never forget this day, Abbas said, "The Palestinian public will also never forget today which will be an unforgettable historical moment. This is because I am paying my first official visit here after gaining recognition of the Palestinian State. I want to thank Turkey. We are extremely grateful for the economic, diplomatic and political support you have shown us. I want to thank all of the Turkish and Palestinian martyrs who have given their lives to break the blockade on Gaza. May God rest their souls and greet you all."

Palestinian President Mahmoud Abbas was accompanied by Prime Minister Tayyip Erdoğan as he stepped down to another standing ovation and exited the hall.