Traces of a bureaucratic oligarchy still visible in Turkey 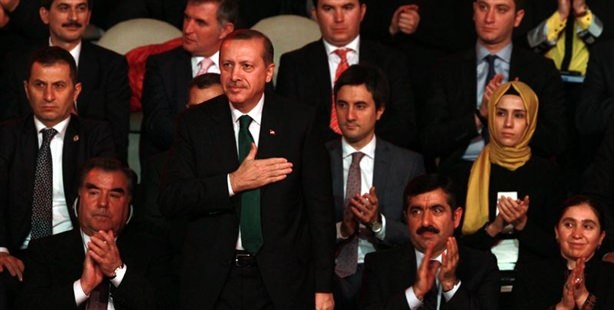 Expressing his complaints regarding the separation of powers in state, which he refers to as the ‘bureaucratic oligarchy’, Prime Minister Erdoğan stated, “The system has errors, we are faced with obstacles at the most inopportune times.” Erdoğan also inferred that he has been tagged himself for simply stating 'Bismillah' (In the name of God).

While in Konya to attend the 739th anniversary of Mevlana's death and reunification with the divine, Prime Minister Recep Tayyip Erdoğan also participated in the 2012 "Konya Economy Awards Ceremony".

"We have reached where we are today by step by step putting an end to corruption, poverty and illegalities," stated Erdoğan. Calling the division of powers system in place in the Turkish state a 'bureaucratic oligarchy,' Erdoğan went on to state the following: "We are still experiencing difficulties even during our own term in power. Unfortunately, the errors in the system are the reason we are having trouble. The system was not established correctly and as a result sometimes we are unexpectedly faced with bureaucratic obstacles, this 'bureaucratic oligarchy' stands in our way. All of a sudden you are face to face with the judiciary. The executive, legislative and judicial powers need to pursue the people's interests first and then secondarily should consider the state. If you delay an investment I was going to make due to a single word in legislature, and if this delay lasts for one to two years, then no one can be made accountable," said Erdoğan.

THE END OF THE WITCH HUNT

Prime Minister Erdoğan also drew upon the February 28th 'post-modern coup' era, noting that Anatolian capital was hit heavy in the coup. "Your only crime was to open up in the morning saying, 'In the name of God' (Bismillah) and to close at night, saying 'Hallelujah'(elhamdülillah)." Erdoğan said that the economic crises in 2000 and 2001 were a direct result of the "witch hunt" initiated on February 28th. The Prime Minister stated that the economic costs alone of the February 28th 'post-modern coup' were between 100 billion and 250 billion liras.

ERDOGAN INFERS HE WAS ALSO 'TAGGED'

Prime Minister Erdoğan referred to the categorizing practices during the coup-era by mentioning that he was also 'tagged' at that time. "Commission reports referring to me personally write that I said, "May God help you" or "In the name of God."They note these items as bills of complaint. Now, I will say yet one more time; Hallelujah. Just so long as my criminal file is filled with statements like these," stated Erdoğan.