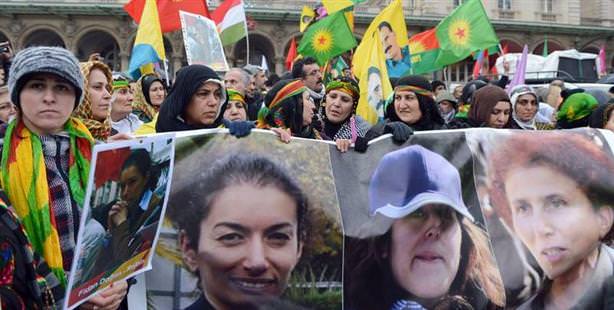 Prime Minister Tayyip Erdoğan demanded on Saturday that French President Francois Hollande explain why he had met one of three Kurdish militants shot dead in Paris this week.

In the early morning hours of Thursday, the bodies of three Kurdish female PKK members, PKK co-founder Sakine Cansız, Fidan Doğan and Leyla Söylemez were found gunned to death in the Kurdish Information Bureau in Paris. Speaking to reporters on Thursday, Hollande said one of the three dead women, who all had ties to the PKK, "was known to me and to many politicians because she came to meet us regularly".

Speaking at a business conference on Saturday, Prime Minister Tayyip Erdoğan responded to Hollande's remark by asking, "How can you routinely meet with members of an organization labeled a terrorist group by the European Union and being sought by Interpol? What kind of politics is this?

The French president should immediately disclose to the public why he met with members of this terrorist organization, what was discussed and to what end he was in communication with these terrorists," Erdoğan said, adding that Turkey would take unspecified legal action on the matter.

Prime Minister Erdoğan also stated that the murdered Sakine Cansiz, one of the founding members of the PKK, had been placed in custody in Germany in 2007, but was released soon after and moved on to France. "We notified French Interpol just two months ago," Erdoğan said. "France did nothing about it."
Speculation however is that Hollande may have met with the 33-year-old Fidan Doğan who was mainly in charge of diplomatic relations and was fluent in the language.

The death of the three women came at a time when Turkey had just recently announced talks with Abdullah Öcalan, the imprisoned PKK leader aimed at brokering a deal to disarm the terrorist organization. In an attempt to bring peace, Erdoğan's party has expanded political and cultural rights for the country's estimated 15 million Kurds since it came to power in 2002.

French investigators have given no indication as to who might be responsible for the killings in Paris, however are looking into a possible connection with the peace initiative began by the Turkish government.

Erdoğan said the killings may be the result of PKK infighting or an attempt to derail the latest peace initiative. "The killings in Paris may have been an attempt aimed at sabotaging this initiative. It may also be score-settling within the ranks of the separatist terrorist group," he said, demanding French authorities apprehend the killers and shed light on the incident.

About 10,000 Kurdish supporters gathered in Paris on Saturday to protest the executions, which some have called a politically motivated killing, chanting slogans such as "We are all the PKK."