‘There are many who preach but neighbors get the job done’ 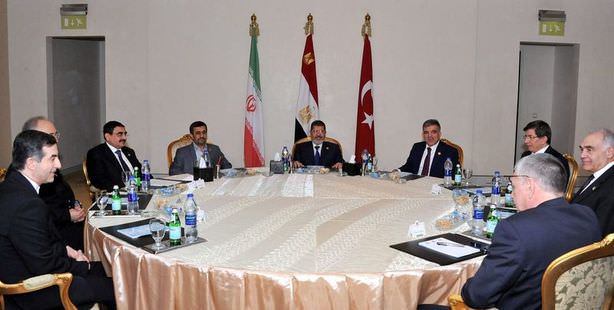 President Gül suggests that regional countries will be the ones to solve the Syria crisis, and says, “It is easy to talk for those whose homes are not on fire.”

Speaking at a press meeting with Turkish press members prior to his departure from Cairo, where he attended the Organization of Islamic Cooperation (OIC) summit, President Abdullah Gül commented on a meeting held with Iranian President Ahmadinejad, Egyptian President Morsi and foreign ministers on the sidelines of the OIC summit, by stating, "Even though it is not openly stated, there are differing positions being held. We sat down and clearly and starkly discussed these issues."

When Gül was asked if Iran's position was preventing a solution from being reached, the President said, "If the Syrian regime did not have this much support to begin with, it couldn't stay afloat, everyone is supporting each other… This is truly a very difficult situation. What is important is figuring out how to say enough is enough within this joint collaboration," Gül said to reporters.

Gül also pointed out that he had the opportunity to meet with members of the Syrian administration and their leaders and said, "The Syrian crisis can only be solved by regional countries at this point, as you can see; distant countries are not contributing much. When it comes to speaking on the issue, there are many who talk, who make rhetoric and who preach; it comes easy to them because it is not their homes that are on fire. We consider this region to be our home, and when I say that, I am speaking on behalf of all of our region's nations.

We have begun a new initiative within the OIC with our foreign ministers; the Turkey, Iran, Egypt and Saudi Arabia quartet. Even though Saudi Arabia was unable to attend this recent meeting we held in Egypt, they are still in contact," said Gül.