Is the BDP not seeking a solution to the Kurdish issue? 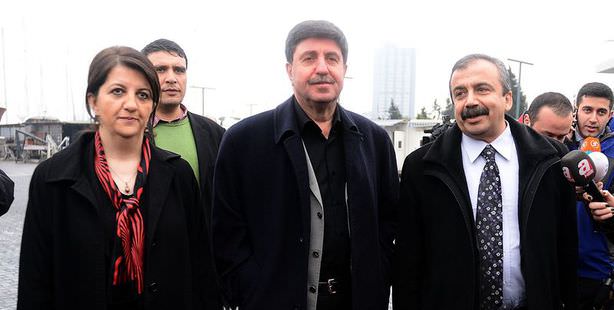 The government and the AK Party are pointing fingers at the delegation of BDP members who held talks with the imprisoned PKK leader Öcalan for leaking notes from the meeting to the press. The overall assumption is that the BDP and the PKK’s factions in Kandil do not want the terrorist organization to drop their weapons until the 2014 local and presidential elections are over.

When minutes from a recent meeting between a delegation of BDP (Peace and Democracy Party) members and the imprisoned PKK leader Abdullah Öcalan were leaked to the press, Ankara began seeking the answer to the pressing question of who could be responsible and why.

Upon closer inspection, the government and the AK Party have reached the conclusion that there may be factions in the BDP and Kandil that do not want the terrorist organization to drop their weapons prior to the 2014 local and presidential elections. The general consensus is the release of notes from the meeting was an attempt to sabotage the government's ongoing peace initiative.

WERE THEY CARRYING A RECORDING DEVICE?

The controversy surrounding the leaking of notes taken during the meeting at İmralı Island has focused more on the question of who leaked the information rather than the actual content revealed. When the minutes from the meeting were first released, it was speculated that the BDP delegation may have had a recording device (the kind resembling a pen). When compared to the National Intelligence Organization's (MİT) records on the meeting, there were inconsistencies in the text that was published. Certain statements made by Öcalan were not included in the notes published which have negated the argument that the text was a result of the meeting being recorded. The option that remains is the speculation that members of the delegation may have penned the notes after the meeting, adding content on their own.

THE GOAL IS TO REMAN ARMED THROUGH THE NEXT TWO ELECTIONS

Two options were being laid to the table as to who leaked the notes: the BDP and MİT. The government has since eliminated the possibility of it being the MİT, by saying, "trustworthy members were there and such a leak is impossible." What we are left with is the BDP. Speculation as to why the BDP would leak such information is that although Öcalan wants the PKK terrorist organization to leave the country by June, the BDP and a group in Kandil may want this process to be spread out over two years, to ensure they do not drop their weapons until the local and presidential elections have come and passed. This group feels that because Öcalan has been incarcerated for a long time now, the PKK leader has turned utopian and is distant from both reality and the issue at hand. According to allegations, it is this group, which is not in favor of the organization relinquishing their weapons, that leaked the meeting notes. Speculation has surfaced that an individual who was amongst the delegation sent to İmralı, who is also closely involved with the faction that does not want to go into two elections in Turkey unarmed may have leaked the information. Going to an election while the PKK is still armed allows the terrorist organization to continue to exert pressure on the citizens of the region as well as to ensure that there is no deviation in the distribution of votes.

EITHER BDP OR THE DELEGATION MAY BE EXCLUDED

At this point, the general vein amongst the government is for this process to be continued. However, there will be a separate evaluation of the position assigned to BDP and the delegation in talks at İmrali. There are two possible alternatives, one being that BDP is excluded from the ongoing peace process and the other second option which is a reshuffling of the delegation assigned to meet with Öcalan. The second option of reassigning a new delegation, rather than leaving BDP out of commission and therefore unable to be a political actor in the role, appears to be a stronger contender.

'WE WOULD NEVER CONSPIRE AGAINST THE PRIME MINISTER'

On Friday, BDP Chair Selahattin Demirtaş announced that the BDP did not leak the information from the meetings. "We would never conspire against the Prime Minister who has said he was willing to drink poison if it would end PKK violence. We are also looking into the incident. Mr. Prime Minister should feel secure. None of our colleagues will ever be in favor of blocking or halting this process."

NOTES DO NOT CORRESPOND TO THE REAL MINUTES FROM THE MEETING

Ahmet Türk, co-chair of the DTK (Democratic Society Congress) also commented on the development. "We are considering this ongoing debate to be speculation. We will be looking into the incident. The notes leaked appear to have no correlation to the real minutes of the meeting," said Türk. BDP Mersin Deputy Ertuğrul Kürkçü said, "It is of no advantage to either Öcalan or the BDP that those notes were leaked."

WAS TAN THE CULPRIT?

The capital was rattled yesterday by allegations that Diyarbakır Deputy Altan Tan may have been the individual responsible for leaking the notes. A number of websites claimed there was footage of journalists, from the newspaper that released the notes, showing them in Tan's office in parliament until 15:30 one afternoon. The parliament is currently investigating said footage. Yet another allegation is that a journalist was seen at the BDP Headquarters until the evening hours prior to the information's release. Meanwhile, Milliyet newspaper Ankara correspondent Fikret Bila has announced that the meeting's records were received from the BDP.