“Iran and Turkey have a serious divergence of views on Syria” 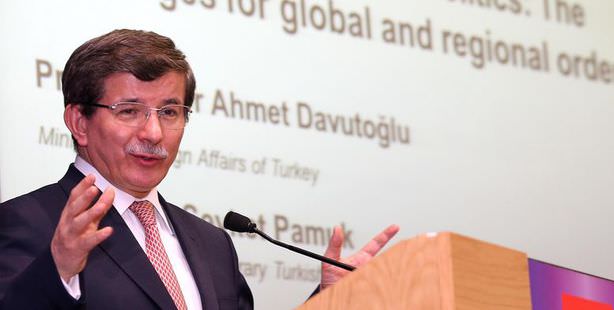 Speaking from London, Foreign Minister Davutoğlu stated, “We have a serious divergence in views with Iran when it comes to the situation in Syria. We hope that Iran will come to understand the new dynamics in the region.”

Visiting the English capital, Turkish Foreign Minister Ahmet Davutoğlu delivered a talk entitled "Transformation in World Politics: The challenges for global and regional order" at the London school of Economics (LSE), during which he said that despite the fact that the crisis in Syria has been ongoing for over two years the resistance of two nations has resulted in the failure to provide the necessary international intervention.

Davutoğlu said that time is passing fast, however an international response is progressing extremely slowly and therefore even though the situation in Syria has existed for over two years, the UN Security Council has yet to reach a decision on a plan of action.

Stating that every night before he goes to sleep he asks himself whether they have or haven't done enough for the people of Syria, Davutoğlu said, "Because history will hold us all accountable."

Davutoğlu also noted that in terms of both power and economy, in order for the EU to be more competitive it needs Turkey.

While taking questions from participants, Foreign Minister Davutoğlu responded to a question regarding Iran's nuclear program by pointing out that they are exerting immense efforts to reach a solution to the nuclear issue in Iran and stating, "We will continue to assist in finding a solution to the nuclear issue because it is problematic for the regional and global environment. Therefore, the 5+1 and Iran will be meeting to negotiate the technical details in Turkey in the next few days. Our position on the issue is clear. We do not want to have a nuclear power in our region, not Iran, not Israel nor any other control. However, we believe that every country has the right to have a peaceful nuclear program."

Pointing out that especially when it comes to the Syria issue, Turkey and Iran have serious differences in opinions," Davutoğlu accused Iran of remaining silent to Bashar Assad killing his own people. We have a serious divergence in views with Iran when it comes to the situation in Syria. We hope that Iran will come to understand the new dynamics in the region. Those who support the new regional order will remain actors in that new regional order."

"Otherwise, Israel will lose out"

When Davutoğlu was reminded of a statement he had made likening the Mavi Marmara raid to the September 11th attacks, the foreign minister said that he drew this comparison in order for the American public to understand how Turkey feels about this attack.

Davutoğlu pointed out that Turkey's position has been clear since the Mavi Marmara raid and noted that Turkey's relations with Israel will never normalize until Israel apologizes for the attacks, pays reparations to the victims and lifts the blockade on Gaza.

"We don't want money from Israel. However, compensation is important because they need to know that they have to take responsibility in international relations. If there is a regional order, then Israel must understand that they are equal to all other countries in this order. They should not look down on others from above and be subject to concessions.

This is an issue of national pride for us. I hope that Israel will understand the new dynamics in the region. Otherwise they will lose out in the new regional order. The new democracies in this region are obligated to hear out their public rather than operate on advice from abroad," stated Davutoğlu.