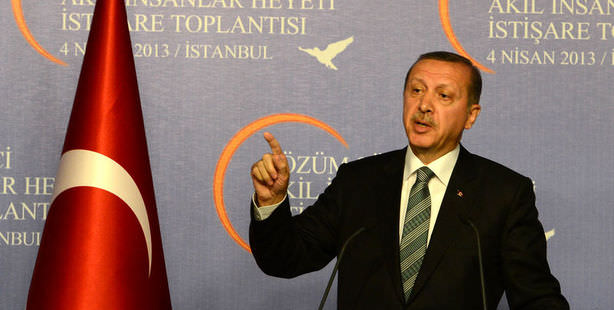 Results from a survey conducted by Konda, which were presented to Prime Minister Erdoğan at a recent AK Party’s Central Executive Board Meeting, revealed that the public is expecting further support from Turkey’s opposition parties for the ongoing solution process.

The Turkish public is demanding the main opposition parties exert further support for the ongoing peace initiative embarked upon by the government to put an end to PKK terrorism in Turkey, according to results from a recent survey. The survey was conducted by posing questions face to face to 2,269 participants in 30 different provinces.

When asked "What should CHP (Republican People's Party) do in regards to the solution process?" 54.4 percent of those polled responded by stating, "They should support peace." When the exact same question was asked for MHP (Nationalist Movement party), 52.8 percent of participants had an identical response. Just 10.1 percent of those surveyed expressed that they wanted CHP to object to the ongoing peace initiative, while 8.8 percent said the same for MHP. Out of those questioned, 13.9 said that CHP "should remain silent on the issue and uninvolved," while 14.3 percent said the same for MHP.

Overall the number of those polled who qualified the peace talks held with the PKK leader Abdullah Öcalan and a delegation from the BDP (Peace and Democracy Party) as "a significant contribution to the peace process," raised from 38 percent to 42.8 percent, whereas amongst AK Party voters, the previous 48 percentage of support rose to 60 percent.

The results to the question, "Who would you vote for today if there was an election", were as follows: 52.9 percent answered the AK Party, 22 percent of those polled put down CHP, 12.7 percent wrote MHP and BDP brought up the rear with 6.9 percent.