Kerry comes with a heavy agenda 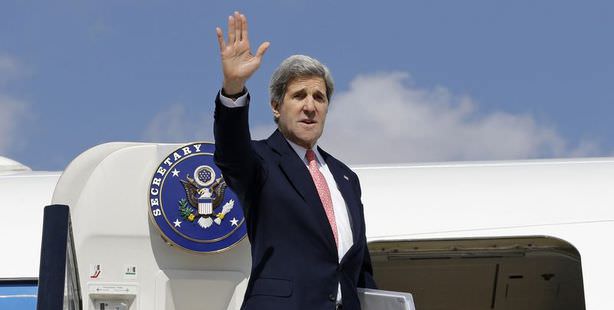 U.S. Secretary of State John Kerry returns to Turkey today for a second visit since taking office on February 1st.

U.S. Secretary of State John Kerry will leave Washington today to travel to Istanbul, Jerusalem and Ramallah over the weekend. This marks the second trip Kerry will have paid to Turkey since taking office, having visited in early March. Kerry arrives to Istanbul today and is scheduled to meet with Prime Minister Tayyip Erdoğan and Foreign Minister Ahmet Davutoğlu tomorrow.

The meetings are anticipated to focus on the following main issues on the current agenda:

• With the reconciliation between Turkey and Israel complete, Turkey will now be requesting the U.S. use their influence on Israel to establish peace in the Middle East. Prime Minister Tayyip Erdoğan's impending trip to Gaza will also be to the same effect. If there is a concrete advancement in Palestine-Israel negotiations then further deliberations may eventually be hosted by Turkey. When Kerry departs Ankara this weekend, he will be heading straight to Israel.

• In order to halt the transport of weapons and support to the Assad administration by Iran via Iraq, Kerry will be suggesting Ankara cooperate with Baghdad.

• Ankara continues to exert their stance that either a restart of negotiations regarding the island of Cyprus should commence or the Turkish Republic of Northern Cyprus should also benefit from the natural resources in the Mediterranean. If the Greeks continue to evade finding a solution to the situation in Cyprus, Davutoğlu will issue a warning that the North will begin utilizing their own resources.

On April 8-9 Kerry will visit Jerusalem, where he will meet Israeli Prime Minister Benjamin Netanyahu, and Ramallah, where he will see Palestinian President Mahmoud Abbas.