Kerry: Turkey plays an important role for peace in the region 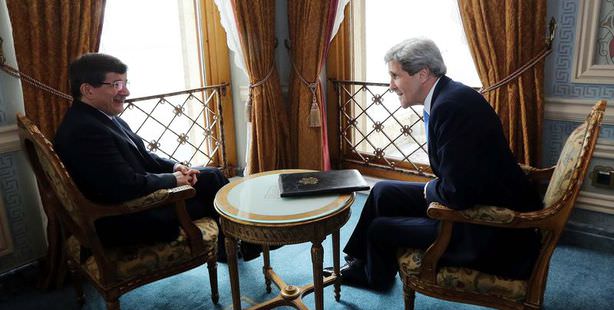 During a trip to Istanbul over the weekend, U.S. Secretary of State Kerry congratulated the Turkish government on the ongoing peace process, saying, “It takes courage. Peace will change the lives of those in Turkey as well as in surrounding societies.”

This marks the second trip to Turkey since taking office in February for U.S. Secretary of State John Kerry who played a crucial role in brokering Israel's apology to Turkey. Kerry, who last visited Turkey on March 1st, arrived to Istanbul over the weekend during which he met with both Foreign Minister Ahmet Davutoğlu as well as Prime Minister Tayyip Erdoğan and offered U.S. support for the ongoing peace process.

Kerry mentioned that some may feel this second trip which follows a previous trip by the U.S. State Secretary in March is too soon in coming and responded by stating, "There is no such thing as acting 'too early' when it comes to establishing peace. There are real issues in the Middle East at present and as the United States and Turkey we have a unique opportunity to work together on these issues."

U.S. Secretary of State John Kerry met with his Turkish counterpart Foreign Minister Ahmet Davutoğlu on Sunday after which the two participated in a joint press conference. During the meeting, Kerry commented that they discussed Turkey's ongoing process to put an end to three decades of terrorism and said, "We watch in admiration and applaud the efforts made by the Turkish government to put an end to violence through peaceful means. We also welcome the commitment of the PKK to disarm," added Kerry. Noting that no peace process is easy, Kerry stated, "It takes courage and determination to overcome years of mistrust and bloodshed. There will be difficult steps ahead. However, we believe that this peace will have a life-changing affect on all citizens in Turkey and will also be a positive influence for other societies in the region."

Kerry also expressed the United States' admiration for Turkey's stance against Bashar al-Assad and the support offered to Syrian nationals. "We are still determined to change Assad's calculations or to exert pressure in order to do so. We hope that a peaceful transition process will take place yet it may not be possible. However, in this case, we will not just sit around and watch," stated Kerry.

U.S. Secretary of State Kerry also discussed Turkey-Israeli ties, emphasizing the importance of the relationship between these two nations for establishing peace in the Middle East. "It is imperative that the compensation component of the agreement be fulfilled. The Turkish government has succeeded in acting sensitively throughout this process," said Kerry.

Kerry underlined that Turkey may contribute greatly to both the critical peace process in the Middle East as well as to the economic transformation in Gaza and the West Bank and said, "Turkey is extremely important for the international community. I think in many respects that a country as strong, energized and transformative as Turkey can have a profound role as being a partner in this process."

A 'CORE GROUP' TO MEET ON SYRIA

During the meeting between Foreign Minister Davutoğlu and Kerry the two discussed in length the peace process in the Middle East and establishing a two-state solution in Palestine. Thanking Turkey for its generosity towards Syrian refugees, Kerry added, "We reached a consensus on the necessity of holding a meeting of a core group of the larger Friends of Syria group as soon as possible. We will begin working on this in the days to come," stated Kerry.

AN HOUR AND 25 MINUTES IN DOLMABAHÇE

After meeting just a month ago, Prime Minister Recep Tayyip Erdoğan and U.S. Secretary of State John Kerry held a meeting at the Istanbul Prime Ministry Office in Dolmabahçe Palace. Although the meeting was scheduled to begin at 13:00, Kerry was delayed by half an hour due to his meeting with Davutoğlu prior going over. Davutoğlu also attended the meeting between Prime Minister Erdoğan and John Kerry, which lasted for an hour and 25 minutes and was held behind closed doors. The current situation in Syria, the developments that followed Israel's apology and Erdoğan's approaching May 16 meeting with U.S. President Barack Obama were the main items discussed. In the afternoon, Kerry departed Turkey to move on to his next destinations of Israel and Palestine.

Just prior to Kerry's visit, Foreign Minister Davutoğlu paid calls to Palestinian President Mahmoud Abbas and Hamas' Political Bureau Chief Khaled Mashaal. According to information obtained by diplomatic sources, during the talks the reconciliation process between rival Palestinian factions Hamas and Al Fatah was discussed as well as the possible steps that could be taken. Davutoğlu expressed Turkey's support for the efforts to restore a consensus in Palestine and their hopes that these efforts will continue.