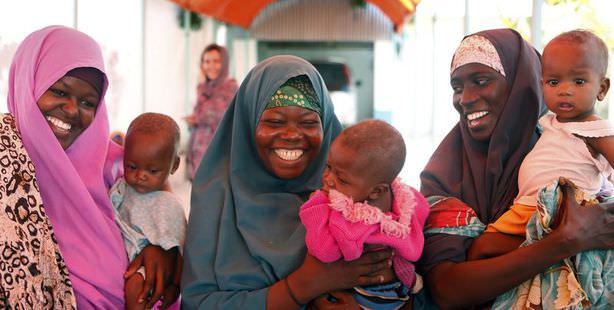 Due to Turkey’s assistance, there are no longer starving children in Somalia. Faces in the nation, which was demolished due to civil war, are now smiling. Turkish doctors, meanwhile, continue to bring the Somalian public back to health.

Reporters from SABAH joined a team of pediatric surgeons brought together by Istanbul Health Department Director Prof. Dr. Ali İhsan Dokucu as they headed to Somalia. The Doctors Worldwide gave us a list of warnings before we took off and put us on medication to prevent malaria. Women had to remain covered. Also we would be accompanied by security. We only learned when we landed at the airport that what they meant by 'security' were smiling Somalians wielding Kalashnikovs that wouldn't leave our side.

When Prime Minister Recep Tayyip Erdoğan arrived here a year-and-a-half ago, a great dream of the Somalians was brought to life. From that day on their lives were changed and since then most Somalians have assumed every foreigner that arrives to the country is a Turk. There have even been songs written in Somalia about Erdoğan. They say, "Somalians and Turks are brothers". It is due to that helping hand from their brothers that Somalia has been brought back to life. However, there is still a lot to be done. The civil war that began in Somalia 20 years ago, when it was one of the world's most beautiful countries, has razed the country to the ground. The once magnificent stone houses situated along the coast of the ocean have all collapsed in the ensuing conflict. When the country was struck by the worst drought seen in 60 years, Somalia was on the threshold of annihilation. The aid collected in Turkey through campaigns launched a year-and-a-half ago has awaken Somalia from a deep coma.

THE NIGHTMARE OF STARVATION IS NOW HISTORY

The onve upon a time relentless noise of gunshots has now been replaced with the sounds of construction and hope. The best development thus far is the fact that children are no longer dying from starvation. Just a year-and-a-half ago babies whose bones you could count were dying because they couldn't find enough milk to survive, whereas now there are just smiling children. The wave of aid that came in from Turkey has carried the poverty line to way above the hunger threshold.

Doctors Worldwide have been treating children in the Nutrition Center for a year and a half now. The children that come to the center are first weighed and then measured. A year and half ago these children would cry from the pain of being put on the scale, whereas now that devastating sight has turned into the vision of children giggling because they think the scale is some sort of toy. As the children there are no longer starving, the nutrition center will be shut down in May. Turkey's Red Crescent (Kızılay) is still distributing food through a mobile cafeteria to 10,000 families still in need. The sole hospital with an operating room was set up by Turks. Şifa Hospital, which is being operated by Doctors Worldwide, was founded by Medicalpark. However, this wasn't an easy feat.

Medicalpark's Executive Board Chairman Muharrem Usta explained that 80 people out of the group of 100 he had hired to work on the construction in Somalia decided at the last minute to not board the plane and he was never again able to get into contact with the team. As a result, both bringing in building materials as well as builders from Turkey has been difficult.

A year in a half ago when it was impossible to sleep from the sounds of gunshots, this hospital, which was set up by Turks who had no life safety, saved a significant number of lives. This hospital was also the sole building built in Somalia in 20 years. The Turkish doctors that have been coming in teams have also been providing training for Somalian doctors. This 66-bed Şifa Hospital treats 150 patients a day. Over the course of a year and a half, 35,000 people have received medical treatment and 3,000 peoples' lives were saved in the hospital's emergency service. The hospital has conducted 700 surgeries.

Somalia has been renewed in a year and a half

Have you ever wondered where the aid collected throughout Turkey in campaigns for the war torn Somalia which was in the trench of drought? Have you ever been curious about how this aid helped to change the situation? We are now on this trip to Somalia to find the answers to these questions. I am joined by Emin Özmen, who has been here four times before and has witnessed the significant developments that have transpired here recently. We joined a team of volunteer doctors that come out to Somalia in different teams every month. Doctors Worldwide have been sending teams to Somalia for a year and a half and we joined with the 15th team to take a closer look at the ongoing transformation.

The following are a series of development that Turkey has initiated:

While accompanying the 15th team of Doctors Worldwide, we had the opportunity to witness a surgery never before conducted in Somalia by the Director of the Istanbul District Department of Health Prof. Dr. Ali İhsan Dokucu. During the seven-hour surgery an internal organ was created for a baby that was burned from the waist down from falling into a fire. The surgery went on late into the night and security guards holding rifles kept guard in front of the hospital throughout the night. This little child, who would have been on the threshold of death in Somalia's standards, has now reclaimed its life thanks to Turkish doctors.

This is a translation of an article originally written by Esra Tüzün and Emin Özmen.