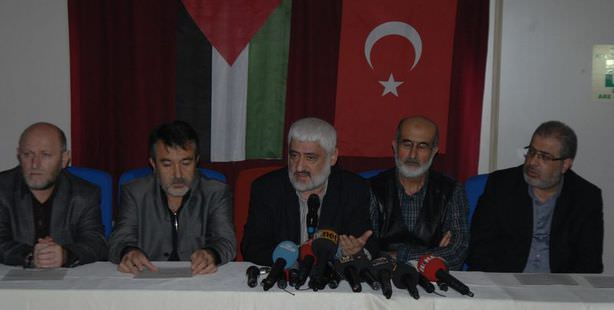 The families of the peace activists killed as well other passengers aboard the Mavi Marmara vessel announced on Monday that although significant; Israel’s apology was not enough and they will not be retracting the case filed against the military members who commandeered the raid until the blockade is lifted on Gaza.

The 'Freedom Flotilla' passengers who were aboard the Mavi Marmara vessel which was delivering aid to Gaza in 2010 when it was raided by Israeli forces who killed nine on board, announced on Monday that they will not be retracting the case until those responsible have been punished for their crimes.

Passengers aboard the Freedom Flotilla Mavi Marmara during the May 31st, 2010 raid; Alim Yazıcı, Musa Coaş, Ahmet Varol, Mustafa Tuna, Şerif Niziplioğlu and Zeliha Sertkaya, held a meeting yesterday to discuss the ongoing cases being heard on the incident as well as the recent apology to Turkey on behalf of Israel.

The group challenged the notion that developed following Israeli Prime Minister Benjamin Netanyahu's apology to Prime Minister Recep Tayyip Erdoğan and announcement that compensation would be paid, that in that case the trial would be dropped against those responsible for staging the military raid.

'THE FAMILIES NEED TO BE APOLOGIZED TO'

A passenger on the ship at the time of the raid Ahmet Varol stated, "We do feel that Israel's acknowledgement of its crime is a significant success both politically as well as diplomacy-wise. However, this apology and compensation is not enough for us. Israel needs to apologize to each of the families of the nine victims murdered in the Israeli raid. We want the blockade on Gaza to be lifted entirely. We do not find the stance that we will retract these cases in return for compensation paid to be acceptable." Meanwhile, another passenger on board the Mavi Marmara raid Zeliha Sertkaya commented that this apology was just part of a bigger game."

This is a translation of an article originally written by Mustafa Kaya.
Last Update: Apr 09, 2013 1:50 pm