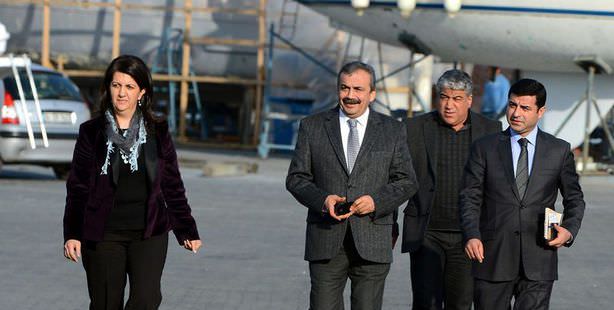 The PKK faction in Kandil has officially submitted their response to a letter penned by the imprisoned PKK leader Abdullah Öcalan. The PKK’s response, which has been delivered to Ankara, reveals the terrorist organizations plans to withdraw in small groups and requests they be granted a constitutional guarantee.

As part of the ongoing solution process, the PKK's Kandil factions has written a closed envelope response that has been delivered to Ankara, to a letter penned by the imprisoned PKK leader calling on the terrorist organization to withdraw from Turkey's borders.

The PKK administration has announced their backing of Abdullah Öcalan's volition to establish peace; however they have also listed a number of conditions when it comes to the withdrawal of their militants from Turkish territory.

A FIFTH DELEGATION MAY BE HEADED TO THE ISLAND

The second letter penned by Öcalan and addressed to the organization's leadership in Kandil, was delivered by BDP Chair Selahattin Demirtaş and Sırrı Süreyya Önder, who have since returned to Diyarbakır with the organization's written response which they handed over to the Ministry of Justice on Tuesday. Demirtaş commented on the letter by saying, "Although we have delivered the letter from Kandil, we do not know what the content entails."

Demirtaş also inferred that a fifth delegation may also be headed to İmralı to continue face to face peace talks with the PKK leader, serving a life sentence on the island. Öcalan is expected to call on the organization to "withdraw" this week. The PKK administration however is expressing that such an order will not be implemented on the entire 2,000 armed members of the organization in Turkey and instead say that the withdrawal process will take place in small groups and parallel to the steps taken by Ankara. The first step is expected to be taken next week.

While Kandil stands behind Öcalan's three-stage plan for the withdrawal and disarmament of the PKK, they do want the final stage of disarmament, in other words the normalization process, to be further discussed. Speaking with the BDP (Peace and Democracy Party) delegation, the organization's leader in Kandil, Karayılan stated, "It is impossible to drop weapons and then withdraw. Disarmament will be the final stage. The over 2,000 militants that will be withdrawing from Turkey will be convening with the nearly 6,000 militants in Iraq. The second stage needs to ensure that all ethnic groups residing in Turkey and all of the languages spoken are given a constitutional assurance," said Karayılan.

Parliament approves forming a commission to handle the solution process

On Tuesday, Turkey's Grand National Assembly passed a proposal submitted by the AK Party to form a commission to address the ongoing peace initiative to put an end to the PKK conflict.