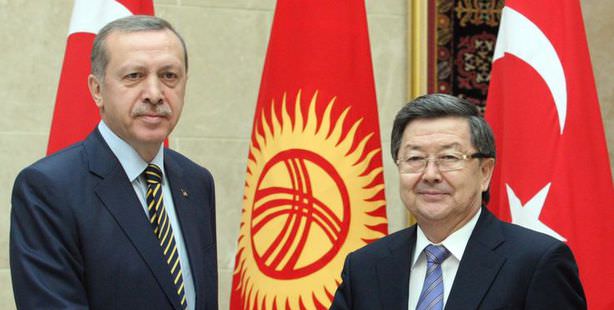 "Despite small issues here and there the solution process is going well,” stated Erdoğan while also revealing that the Syrian PKK militants in Turkey have already withdrawn from Turkey’s borders.

Recep Tayyip Erdoğan answered questions posed by correspondents Tuesday evening while the Prime Minister was en route to Kyrgyzstan where he kicks of a two-nation tour that will also include Mongolia. After arriving in the first stop of Bishkek, Erdoğan will be meeting with Kyrgyz President Almazbek Atambayev.

THE SOLUTION PROCESS IS PROGRESSING WELL

When will the withdrawal process of the PKK in Turkey begin?

"We will have to see upon my return. My colleagues will not take any further steps until I have returned. However, if they (the PKK) choose to leave the borders, during this time, they may do so. There are approximately 1,500-2,000 PKK members. However we speculated that the number is actually quite higher considering those who have not gone down in records. There is no blockage in this process. There may have been small issues here and there; however the ongoing solution process is progressing well. I will also be paying trips to Diyarbakır, Van and Urfa.

"A majority of the Syrian PKK members in Turkey have withdrawn and moved on to Syria. Due to the ongoing civil war, they were withdrawn from the borders through a route kept confidential. If we want the process of withdrawal to go by without incident then it has to transpire without arms. If there are arms there could be difficulties."

There are reports surfacing that state the military is waiting on written orders. Is there such a thing?

"No, there is no such thing. If there is an order that needs to be given we will do so to our police and our military."

Will security measures be taken in regards to the 'wise people' committee?

"We have delivered orders to our governorships and they will be paying extra sensitivity. The 'Wise People' will be establishing their own agenda and will be working accordingly. I would have included Fatih Terim (Technical Director of Galatasaray) in this commission; however he is extremely occupied with his job at present. He is a man that is not only "politically knowledgeable" when it comes to sports, but he is also wise in all areas."

What is the public support for the ongoing process?

"Overall, 58 percent of the public is in support of the process. This rate will increase after we pay visits to these regions. Support is good in the Mediterranean however it is low in the Aegean and the Black Sea regions. In the Black Sea, support in favor is 43 to 43 percent against. There is a bit of an issue in the Aegean. There is also the CHP and MHP factors. Otherwise there is no other issue. We experienced the same situation with the referendum."

Prime Minister Erdoğan also commented on the recent visit by U.S. Secretary of State John Kerry as well as his own impending trip to Gaza by stating, "After John Kerry's visit we may expect momentum to be gained in the situation in Syria and the Middle East peace process. Kerry will be returning in 15 days for a Friends of Syria group meeting in Turkey. My trip to Gaza however will come after my trip to the United States," said Erdoğan.